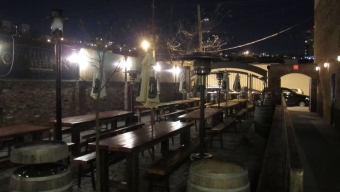 In July of 2011, Hobokenâ€™s first authentic beer garden arrived in the borough amid much speculation and subsequent fanfare. Tucked uptown on 15th and Grand Street, Pilsner Haus and Biergarten comes to the borough from the team behind the wildly successful Williamsburg haunt, Radegast Hall and Biergarten, which has been purveying tasty imported brews and fare to neighborhood hipsters since the fall of 2007. The festive and cavernous space, much like the surrounding area in which it resides, resembles a non-descript industrial building, in the shadows of the lights of far away Washington Street. But the authenticity and festive nature of the International culture are best reserved for inside the barâ€™s massive space, which holds perhaps Hobokenâ€™s finest newly created gem. .

Inside, itâ€™s happy hour now. The natural lighting of the sky is dim and the interior of Pilsner Haus follows suit. Large rectangular communal tables make up the bulk of the seemingly endless space in both the barâ€™s main area as well as its additional side room, surrounded by the ancient looking exposed brick walls, and held together by the sturdiness of old barnwood pillars. Outside, similar tables and umbrellas now folded up sit waiting for the warm weather of springtime, and for some of Hobokenâ€™s most passionate drinkers to make their way uptown. Any returning visitor to the Pilsner Haus will swear by the food here- the â€œHungarian Beef Goulashâ€ ($15), an awesome â€œBavarian Soft Pretzelâ€ ($11), and the heaping portion of â€œSteamed Bier Musselsâ€ ($9), being among the highlights. Their separate grill area for brautwursts works like a butcher shop, wherein the waitress will not take your order for them, is also a charming little wrinkle to a visit here.

Unlike most Hoboken happy hours, the suds here unfortunately arenâ€™t dirt cheap, but inside a Biergarten, we wouldnâ€™t expect them to be. They do however offer a free bratwurst with any liter-sized beer as well as $4 half liters before 8pm. And with the heavier beers available at Pilsner Haus, we made sure to have our drinking shoes on. The extensive list of around draught 20 beers sits on a wall behind the main bar, with 50 more of the bottled variety. Although this isnâ€™t the ideal spot to watch a game, as the televisions are practically non-existent, you didnâ€™t come here for sports. You came here for a laid back Bavarian escape, which is exactly what the Pilsner Haus and Biergarten delivers with startling authenticity.

Preconceived notion â€“ If it was anything like Radegast Hall and Biergarten, we knew weâ€™d be in for a fantastic new place. Luckily, the owners stayed remarkably true to form, with the only knock being the distance from the usual dive bars we frequent. But hey, itâ€™s time for a change anyway.

Crowd stereotype â€“ Mostly late 20â€™s and early 30â€™s types at the bar, looking like workers grabbing a pop after a long day. For a weeknight, itâ€™s probably a little far uptown to expect many out-of-towners.

Music â€“ Some George Thorogood was tearing up the speakers, but the music was almost like white noise amongst our groupâ€™s clinging of liter glasses.

Value â€“ Not the best deal in Hoboken, but you arenâ€™t drinking PBRs here either. Itâ€™s a solid deal for some food and a beer and a nice change of pace.

Date â€“ If sheâ€™s never been here, bringing a girl on a date here might be intriguing. If youâ€™re a girl bringing your guy here, he might not ever leave.

Hookup â€“ After a weekend day of drinking, Iâ€™d definitely think itâ€™s possible. Then again, she may have terrible bratwurst burps.

Dance â€“ Probably not the first place Iâ€™d shake my tailfeather, but youâ€™re welcome to pregame here and head out for sure.

Catch up with a friend â€“ Absolutely.

First or last drink of the night â€“ A heavy beer at midnight isnâ€™t always an ideal situation, but throw a couple back here before you head out and youâ€™ll be fine. Or just stay here until you are completely bombed and try to speak fluent German.

Overall – Ask any Hoboken resident whoâ€™s been to Pilsner Haus and Biergarten and youâ€™ll likely find nary a negative word used. The vibe here is different than any other crummy spot in the Borough and the place actually feels like itâ€™s away from home. It might be situated in the middle of nowhere but the Munich meets New Jersey atmosphere is unmistakably fun. Finally, a trip out to Brooklyn or Queens isnâ€™t necessary for a Hoboken resident. And best of all itâ€™s an unpretentious no frills bar that is what it is- the best place to come into Hoboken in quite some time. 9.3