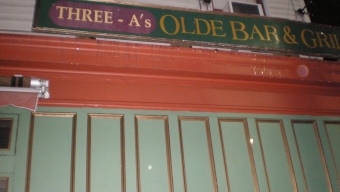 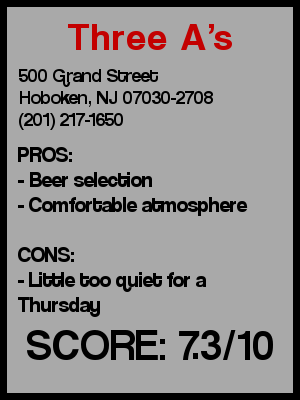 Tomorrow is one of the craziest events in Hoboken- the Hoboken St. Patrickâ€™s celebration.Â  For the 24th time, the city will have a parade, turn green, and thousands upon thousands of drunks in their 20â€™s and 30â€™s will descend into the streets, bars, and apartments.Â  The drinking starts early, refills happen often, and everyone pretends they are Irish.Â  For the last 5 years I have followed the same routine to a successful St. Pattyâ€™s Day and it has always involved Three Aâ€™s Bar and Grill.Â  It has been drinking at my apartment starting at around 7:30am, heading out to Three Aâ€™s right before they open, then spending 5 or 6 hours drinking at the bar, and then a couple more at another friend’s house party.

I made my 2011 trek over to Three Aâ€™s Bar and Grill this time just prior to St. Pattyâ€™s Day.Â  No the bar is not owned by Brett Anderson, Mark Ellis, and Cliff Pennington (wow that probably was understood by 2 out of the thousands and thousands of readers of this entry).Â  It was a Thursday night when I walked inside the familiar place but this night was nothing like the St. Pattyâ€™s Day crowd that I associate with the place.Â  Three Aâ€™s is located at the corner of 5th and Grand, one of the furthest west watering holes in Hoboken.Â  Being so far from the main drag, it gets a very neighborhood crowd.Â  The part of Hoboken that surrounds Three Aâ€™s is traditionally Italian with a lot of born and raised Hobokenites.Â  Hearing some of them conversing in Italian is definitely something fairly unique to this bar. Â The crowd was mainly mid 30â€™s and older and they were watching a little college basketball and a lot of some of TVâ€™s finest shows like Winter Wipeout on ABC.Â  In fact the place was a little boring, a far cry from the craziness that will ensue at 9am on Saturday.

Three Aâ€™s has a front room which consists of the bar and a back room for dining.Â  One of my favorite parts about 3 Aâ€™s is that the bar is very long, and while not an island bar, it does allow for people to sit on all four sides.Â  I also have an appreciation for the old Hoboken street signs they have hanging up.Â  The music was not noticed but there was a Touchtunes machine so I guess if you wanted to you could have set your own mood for the night.Â  They have a better beer selection than some of the recent places I have gone too. Being a hefeweizen fan I had a pint of Franziskaner Weissbier and followed it up with Sam Adams’ seasonal Noble Pils.Â  Prices were pretty average. On the tables there was a list of bar specials including an intriguing one for $4 well drinks and $3 shots all night on Fridays and Saturdays.Â  Donâ€™t know if thatâ€™s going to be active on St. Pattyâ€™s but that seems like a good deal.

Preconceived notion â€“ Iâ€™ve been here many times before, sometimes on the weekends and sometimes during the week, but since it was a Thursday I figured there would be a neighborhood crowd, but one that varied in age.

Value â€“ No specials on a Thursday but decent ones on Friday and Saturday night.

Date â€“ Pretty good place. Not too crowded and a little quiet so you gotta have something to talk about, but they do have good food and you can transition easily back and forth from the bar.

Catch up with a friend â€“ Great

Overall -Â  I actually was pretty disappointed with Three Aâ€™s.Â  I thought there would be a bigger crowd on a Thursday night. We stayed till almost 11 and it definitely didnâ€™t seem like the crowd was going to pick up.Â  Instead the crowd felt like a Monday night crowd and was a little older than what I remembered.Â  It is definitely a great neighborhood bar and they do have some good beers on tap.Â  I would still highly suggest anyone going out for Hoboken St. Patâ€™s that wants to go to a bar with 10-15 friends, especially one that wonâ€™t have a long line, and has an affordable cover to head over to Three Aâ€™s.Â  (Of course you could fight with the crowds on Washington and First Street to see a bunch of old irish people walk the street if you are into that sort of thing).Â  Unfortunately, I canâ€™t base this score on past experiences so I will give Three Aâ€™s a 7.3.