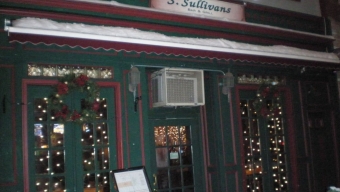 Spirits In the Sixth Borough: Sullivans

The bar crawl challenge begins with an easy neighborhood bar: S. Sullivanâ€™s.Â  Affectionately called Stinky Sullivanâ€™s (I guess thatâ€™s not too affectionate), this dive bar sits at the corner of Washington and 6th Street and regularly draws from the students at Stevens Institute of Technology.Â  Now there are dive bars that try too hard to be dive bars and fail the test of authenticityâ€¦and then there is S. Sullivanâ€™s.

S. Sullivanâ€™s reminds me of your friendâ€™s basement when growing upâ€¦right down to the posters that hang on the wall.Â  One of them, titled the â€œThe Bars of Hobokenâ€ (fitting for my first bar of the tour) has pictures of about 15 Hoboken bars.Â  That poster probably was put out at least 15 years ago, as nearly half of the bars no longer exist.Â  If anyone has a copy of this poster that I could buy from themâ€¦please let me know. The other poster I am willing to bet is not up on the wall of any other bar in America is a promotion for ABCâ€™s daytime soap opera â€œThe City.â€ Now I am being completely honest when I say I donâ€™t remember that show at all, but thanks to the good folks at Wikipedia it apparently was on from 1995 until 1997. Apparently I missed the storyline that involved a one night stand between a photographer and post-op transsexual model, but Iâ€™ll be sure to keep my eye on the Soap Network for reruns. Having an unmemorable and canceled soap opera poster on the wall definitely set a precedent for this dive bar.

On the night I went to S. Sullivanâ€™s, Stevens was on break and it was fairly early on a weekday night so the bar was predictably empty.Â  S. Sullivanâ€™s isnâ€™t very big- it has around 5 tables for 2, a few large tables in the back, and about 10 seats at the bar.Â  On the tables there are character enhancing old stained glass desk lamps which keep the bar fairly dark.Â  The music that night was mainly classic rock (Beach Boys, Beatles, Aerosmith) followed by 1990â€™s favorites Gin Blossoms and REM.Â  There was also a Touch Tunes machine in the back, so anyone that felt like playing some of their favorite tunes could jump right in and play DJ.Â  There were a few groups of four and some couples, enjoying some midweek frosties.Â  The TV had some college basketball being played in the background but everyone was mainly conversing over the good background music.

S. Sullivanâ€™s only has only a few beers on tap (Blue Moon, Yuengling, Sam Seasonal, and Sierra Nevada) but they make up for lack of selection with a good number of deals.Â  Half priced draught pints, a PBR can special (another dive bar staple), and a few others including a sangria special. I wasnâ€™t adventurous enough to order a sangria special at a dirty dive bar but I was thrilled to see specials prominently displayed both outside the bar and inside the bar to make it easy for me to make my selection. I really donâ€™t know why other bars make you guess or have to inquire as to what specials they offer. So I had a couple of pints (a Blue Moon and Yuengling to be exact).Â  Iâ€™m not a beer snob by any means but the Yuengling especially didnâ€™t taste as good as I have had at other places. Itâ€™s possible their lines could use a little cleaning.Â  But you canâ€™t argue with their prices: 2 pints and wine that my guest had cost a whole $8.

Preconceived notion â€“ I had been to S. Sullivanâ€™s once before and I remember it being pretty divey.Â  The prior occasion was St. Patrickâ€™s Day (the real one, not the Hoboken one) and I used their bathroom to throw up an Irish Car Bomb that some strange guy bought for me.Â  I remember not really feeling embarrassed about puking in their bathroom so I was pretty sure the place was going to be a dive.

Value â€“ Great bang for your buck. Can get a decent buzz for less than a sawbuck (however much money that is).Â  Note that they have a $20 minimum for credit cards.

Catch up with a friend â€“ Great!

First or last drink of the night â€“ Great!

Overall -Â  The drinks are cheap, there will never be a line to get in, and it has decent music. All of those things mean a lot to me.Â  However the beer selection and quality is relatively weak. Â I know that the point of a dive bar is to make it look like you arenâ€™t trying, but I feel that S. Sullivanâ€™s is missing a little â€œitâ€ to make it a memorable dive bar.Â  I wish it was a little more like Rudyâ€™s in NYC in that respect. The 90â€™s vibe was comforting to me, but I donâ€™t know if I would go out of my way to grab another drink here.Â  If I was in the neighborhoodâ€¦sure, but Iâ€™m not going to change my walk home to grab a beer. On a scale of 1-10, S. Sullivanâ€™s gets a 7.1.