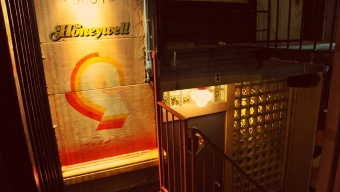 A walk down the handful of stairs leading into the basement bar and lounge space called The Honeywell is a passage back in time, one into a 1970â€™s inspired West Harlem atmosphere replete with dated lighting, tacky ambiance and all of the charm and accoutrements that would make this now distinct sort of place so very memorable in 2018.Â  Much in the same fashion that Williamsburgâ€™s Rockarolla has made the art of the old-fashioned New York City dive bar such a fun destination, The Honeywell is equally as pleasurable, despite being (gulp!) more refined.Â  Of course, the requisite dÃ©cor is not without its standouts- particularly a small but eye-catching Billy Dee Williams Colt 45 advertisement stationed beside the flashing static emanating from a reception-less television, undoubtedly powered on for the sole purpose of conversationâ€™s sake.

Seemingly plucked straight out of a scene from a Richard Roundtree film (see: Shaft), the dimly lit and sleek bar/lounge space is an excellent one.Â  Outfitted with a brown leather and gold-colored interior along with some plush green leather chairs, the long spacious bar and high top tables are completely filled on the night we arrive, with guests served by a talented bar staff that showcases the necessity of a chemistry background in their mixology. Â Donning ample hats and facial hair, the hipster vibe stops there â€“ as the friendly servers whip together a truly complete cocktail program using every conceivable element from liquid nitrogen to a literal blowtorch in concocting drinks that mesh fresh, tasty ingredients and some performance pizzazz.Â  Blaring in the background â€“ you guessed it â€“ everything from the era that you might expect to hear in a bar such as this one. Â David Bowie (â€˜Life on Marsâ€™), ELO (â€˜Evil Womanâ€™) and Hall and Oates (â€˜Sheâ€™s Goneâ€™) were of particular note while we slurped down one delicious cocktail after the next.

Candidly, one could be blindfolded and point to anything listed on the extensive cocktail menu of â€˜Signatureâ€™ drinks and find something to be utterly satisfying.Â  Priced from $13-$16, we swooned over â€œThe Bushâ€ ($16) a lip-smacking bevy of gin, egg whites, raspberries and lemon and the tequila-led â€œVivi Con Fuegoâ€ ($14) replete with mezcal, sage, cucumber and a hint of rosemary syrup â€“ that is served, quite literally, on fire.Â  Even the â€œStrong Ice Cream Floatâ€ ($18)Â where ‘strong’ is an understatementâ€“ a massive serving of homemade vanilla ice cream paired with Buffalo Trace Whiskey, Baileyâ€™s, Curacao and Coca-Cola- though huge, packed a wallop of flavor in its overall decadence.

Getting a bit wobbly-eyed from such deliciousness, some of the snack-related menu fare became essential. Â Â Though you might not find any traditional main course dishes at The Honeywell, the litany of â€˜Bitesâ€™ and â€˜Balls on Balls on Ballsâ€™ more than aligns with the placeâ€™s vibe.Â  Â The â€œChicken Apple Slidersâ€ ($12) for instance, topped with a rich layer of gruyere cheese, tart granny smith apple slices and a touch of creamy adobo aioli, were particularly satiating.Â  Similarly savory, the â€œThyme Baked Wingsâ€ ($9) dished with a side of chipotle ranch were juicy, meaty, and delightfully sauce-covered, pairing perfectly with the starchy side of baked â€œPolenta Friesâ€ ($9).Â  In a bit of a surprise, the â€œShrimp Cocktail Cevicheâ€ ($14) may have been the eveningâ€™s finest dish.Â  Pairing tequila and cilantro and avocado and cucumber and onion and clamato sauce together made for a mouthwatering base for the bulbous hunks of shrimp laid out before us.Â  But after two or three of these potent drinks, the festive atmosphere, fun team of mixologists and an energetic playlist will manage to make even the harshest critic a believer that in retrospect, the 70â€™s werenâ€™t so bad.Â  And neither is the worthwhile trek up to West Harlem for a place as unique as this one.

Insider Tip: Take advantage of the season now by ordering up an outstanding â€œHot Toddyâ€ while itâ€™s still featured on the menu.Â  Better yet, the monthly Drag Brunch amplifies the fun to unparalleled heights â€“ with the next one slated for this coming Saturday.Â  Information is available here.