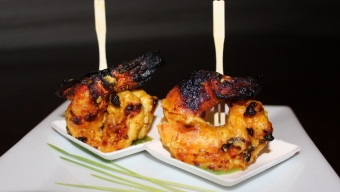 Multiple pillars stand perched outside of the Murray Street location of Benares Indian Restaurant, which when unobstructed by typically camouflaging New York City scaffolding, reveals a particularly sleek and modern ambiance just within the buildingâ€™s dual doors. Outfitted with shiny brown floorboards and yellow banquettes, Benares is an inviting atmosphere that feels like a distinctive downtown haunt to dig into some savory Indian-inspired fare. With its unique interior layout and inventive contemporary menu, fans of this style of cuisine would be hard pressed to find a dining experience that delivers this much overall value â€“ in a Tribeca neighborhood that is normally bereft of such a concept.

It is an early weeknight evening when we arrive at Benares. The small bar area is already buzzing as a â€˜change of paceâ€™ to the atypical area Happy Hours. Many of the tables are already filled, even at an early hour, filling us with anticipation as we situate ourselves to experience each course. Despite being utterly reasonable- there isnâ€™t a dish that exceeds $26- the menu leans on the cuisine of Utter Pradesh, the Western state where the city of Benares is located. What that means for the New Yorker is a smattering of fresh seafood, meats and vegetables doused in delicious tomato sauce, using ginger, cumin and garlic among other spices to really showcase the authenticity of the region.

If the fiery â€œKhasta Gobhiâ€ ($8) wasnâ€™t the most tasty cauliflower weâ€™ve ever tasted, itâ€™s difficult to recall a finer version. Battered to a crisp with garlic and some peppers and served in a spicy red sauce, the dish resembled a similar mouthwatering stickiness of a great General Tsoâ€™s dish- but the all veggie version was definitely noteworthy. We grabbed slices of warm â€œGarlic Naanâ€ ($4) and lathered each doughy morsel with the sauces from the cooked cottage cheese â€œPaneer Makhaniâ€ ($15) and the cinnamon and black pepper doused â€œKonkani Shrimpâ€ ($14), bulbous prawns that were both tender and juicy.

While Benares certainly serves up their share of Indian staples â€“ your â€œChicken Tikka,â€ ($13) savory and piping hot â€œAdraki Samosasâ€ ($8) and a zesty â€œChicken Vindalooâ€ ($17), each seems like they are crafted meticulously. The carefully prepared and fresh fare allowed each dish to seemingly be tastier than its predecessor. Even the simply prepared â€œLamb Chopsâ€ ($25) were perfectly slow cooked in a clay oven, deliciously seasoned with each juicy bite pulling seamlessly from the warm foil covered bone handle.

In all likelihood, there is a strong chance that we wonâ€™t ever find ourselves in the Western state of Utter Pradesh. But that said, itâ€™s this sort of eclectic style of cuisine that is entirely worth celebrating in downtown Manhattan. Supplemented by some truly outstanding service, the expansive menu allowed us to sample a great many dishes and happily, it was tough to take much umbrage with anything that touched our table. The comfortable setting and wonderful aromas make Benares a hidden gem amongst Tribecaâ€™s overhyped and often overpriced list of restaurants. And in a pleasant surprise, itâ€™s also a restaurant we find worth revisiting to sample even more of the placeâ€™s massive selection of offerings.