Spirits in the Sixth Borough: The Brass Rail 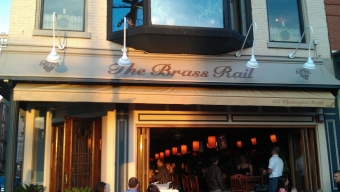 Spirits In the Sixth Borough: The Brass Rail 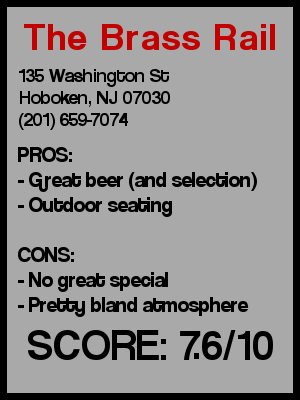 Well the weather has turned the corner it seems and with the nice weather here to stay itâ€™s a little easier to work your way to a bar.Â  Bars with outdoor seating or large windows that look out onto the streets become a main draw, basically begging you to come in as you walk by.Â  One such bar, The Brass Rail, caught me as I was walking by and became the next bar in this year long bar crawl.

I walked into the classic looking bar on a Thursday night and there was a pretty decent crowd already there.Â  It was around 7ish and all the seats at the bar were taken and my date and I were seated at one of the bar tables.Â  Most of the people around us were grabbing food, but we were more interested in getting a few drinks first.Â  I looked at their extensive beer menu and ordered an Ayinger Brau-Weisse.Â  I must say, while it doesnâ€™t pack the punch of the Golden Monkey that I had at 1-Republik, it probably was the best tasting beer I have had this year- tasty, not too dark or light, and the perfect temperature.Â  Iâ€™ll definitely be on the lookout for it elsewhere in Hoboken.

My date decided to try one of Brass Railâ€™s infused drinks.Â  Apparently they are known for these and the Hoboken-Bar.net android app promised they were to be on special (it was not the case), so the choice was made to try the Wild Grape infusion. The drink came out in a glass looking like a deep margarita glass with frozen ice chips along the top.Â  Pretty impressive looking. However the drink tasted like a Dimetapp and Vodkaâ€¦and heavy on the vodka.

For a second round I considered one of their wines, as the restaurant is known for their respectable wine list, but decided to stick with the beers.Â  I chose the Prankster which was a Belgium style ale from California.Â  It was a good follow-up from my Ayinger as they both have a slightly fruity after taste.Â  The beer also went well with my dinner, and I would be remiss to ignore the fact that they have pretty good food here.

While waiting for the check I perused the rest of the bar and noticed a coupleâ€¦probably in their mid 30s all over each other at the bar.Â  Both had really long black curly hair, or maybe it just appeared that way as you couldnâ€™t tell where oneâ€™s hair began and the other ended.Â  They were really going out at itâ€¦ at a barâ€¦ in their mid to late 30sâ€¦during dinner time. Now I know that bar hookups are commonâ€¦but usually its reserved for people in their 20â€™s in Murray Hill or the Village, and not usually while its still light outside.Â  Either wayâ€¦I guess that’s good for themâ€¦or thatâ€™s disgusting…itâ€™s not for me to decide.

Preconceived notion â€“ The bar’s been there for a long time, and I have never gone in. I always thought it looked like it would be a little overpricedâ€¦and maybe a little too classy and not enough neighborhood for me.

Music â€“ Typical classic rock music, but not too loud

Value â€“ Average.Â  No real specials when I was there.

Date â€“ Actually this place is ideal for a date. And apparently there is some magic in the air…

Catch up with a friend â€“ Perfect, very comfortable crowd.

Overall -Â  As I said earlier, Iâ€™ve never been to this bar before. I have probably walked by it over a hundred times on my way to the bank or the PATH and usually try to see if I could catch a glimpse of the sports scores. I would definitely consider coming back though. Outside of the beer selection, I donâ€™t know if there is anything that makes this place outstanding, however.Â  So Brass Rail, you had me with the Ayinger.Â  On nice days itâ€™s great because of the outside seating, and for days that you might want to grab a good meal, itâ€™s good as well.Â  On a scale of 1-10, Iâ€™ll go with a 7.6.