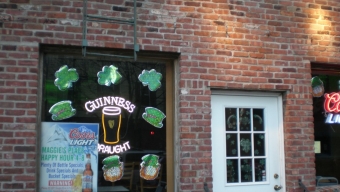 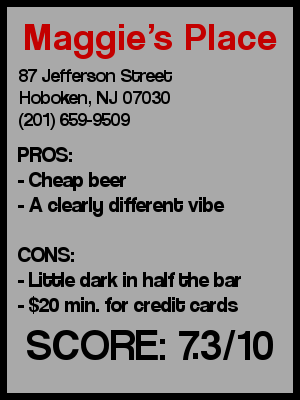 Maggieâ€™s Place used to go by the name El Cuatro Bar (according to Google Maps) and as the previous name suggests it was definitely a “Latino” bar.Â  We walked into the dimly lit establishment at around 4pm and were pleasantly surprised to see about 10 other patrons.Â  We quickly took 4 seats at the octagonal, center island bar.Â  We asked about specials, and were delighted to find that they offer $2 Coronas and Miller Lites and $3 Heineken and Heineken Lights.Â  I opened with a Corona figuring that it fit with the bar and the only downside was that they had a $20 minimum for credit cards.

Despite the fact that we were the only group of people speaking English to each other, the bartender and the crowd made us feel welcome.Â  We had a good time chatting it up with the bartender and found out that they are putting in a new kitchen in a few weeks.Â  The center island bar was right at the front of the establishment and there was a wide open area in the back that was dark while we were there but I would imagine it would be used for private parties. There was a relic of the past: a payphone near the bathrooms. I have no idea if it still worked or why anyone would use it, but itâ€™s worth noting that if you need to make a phone call and you donâ€™t have a cell phone, I guess you should head to Maggieâ€™s Place.Â  There were two HD televisions- one showing Goodfellas and the other one showing The Baseball Network (for some reason no college basketball was on).Â  There were two domino tables near the front of the bar, but no one was playing while we were drinking.

Despite not speaking the same language of the other patrons, our group never felt like outsiders.Â  We were welcomed warmly and even got in on some of the jokes. When one of the patrons walked in with a bunch of limes (for the Coronas) the bar burst into cheers and we clapped along. Another patron (he looked a little like Jimmy Smits from his season on Dexter and for some reason was wearing 2 watches on the same hand) came in with frozen shrimpâ€¦no idea why, and considering their kitchen was under construction, I honestly have no clue what they were going to be used for.Â  But either way, Maggieâ€™s Place was a pleasant surprise.

Preconceived notion â€“ I had always heard it was a Spanish/Latino bar so I figured when I walked in with a bunch of English speaking 20 somethings that the music would screech to a stop and everyone would look at us.

Crowd stereotype â€“ All men except for one patron (as in bar-goer, not the tequila) and the bar tender.Â  Most of the men were in their 40s or 50s.

Music â€“ It was in Spanish, although I may have heard a song in Italian as well.

Dance â€“ Not while we were there, but then again Latinoâ€™s can be great dancers, so maybe later in the night there would be some great dancing

Catch up with a friend â€“ Maybe

Overall -Â  Not every bar in Hoboken is going to be the same cookie cutter place serving either the B&T crowd or the â€œYuppiesâ€ (and I use that term very loosely).Â  Some bars are going to be a little more ethnic, and have a different flavor to serve a community that deserves to be represented in Hoboken.Â  And Maggieâ€™s Place is one of those places.Â  I honestly had a great time there.Â  The people were really nice and welcoming. I donâ€™t know if I would make it a habit and become a regular there, but if I lived in the neighborhood, I would give the place a shot on a weekend afternoon for a few beers.Â  For $2 a beer, how could you go wrong?Â  On the 1-10 scale Iâ€™ll give it a 7.3.