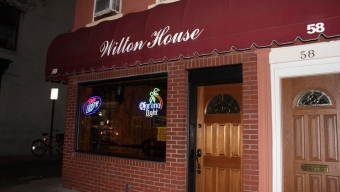 There’s a fine line between a dive bar and a joint that’s just simply old. Hoboken’s Wilton House straddles that definition. As one walks from the PATH station to the popular pubs on Washington Street you may miss the tiny bar with the maroon awning. But just one drink inside is an experience at a laid back joint, the likes of which exist nowhere else in Hoboken. Also did I forget to mention it’s dirt cheap.

After a long work day I called up a friend to grab dinner in the area. Before we settled on a place to eat I suggested we stop at a bar for a few beers. Since we were both not in the mood for crowds, we decided on Wilton House as neither of us hadn’t been there before and we assumed it would not be packed. Once inside, we were surprised at just how un-packed it actually was. Besides two guys eating at the far end of the bar, it was just us. We didn’t have a problem with that, since we wanted to be able to hear each other. After a few minutes of waiting, the well-worn bartender made his way over to us, letting us know that domestic draughts were on special at $2. The only problem is they are cash only but after a quick pit stop across the street at CVS, we gulped down our ales. Not a big deal, but just be sure to have cash when you go.

The beers are served in traditional mugs, which really help add to the old school feeling of Wilton House. Overall the bar is pretty basic in design. Patrons will be able to saddle up to one of several stools at a long tan wood bar. That’s really about it. There are no tables, kitchen, or back area. And they don’t serve Diet Coke. It’s the bar or the street. But that really isn’t a problem when you are there simply for cheap booze. The one form of entertainment besides talking to people, is the jukebox. Wilton House is outfitted with a touch screen player that takes dollars and plays two songs per bill.

After putting on some Tom Petty and Bruce Springsteen, we ordered a few more mugs. After each beer, we settled into our stools a little easier. This place may not have the same vibe of many of its Hoboken brethren, but damn is it a relaxing spot. If you choose to sit by the front of the bar there is a huge window to people watch, which is great- seeing people just getting off the train from work, looking salty.

Preconceived notion â€“ Old man bar that I would not feel comfortable drinking at.

Date â€“ Only bring a date here if you’re both trying to be ironic. Other than that bad choice and you’ll regret it.

Dance â€“ If you try and bust a move at Wilton House, I can almost guarantee they will ask you to leave.

Catch up with a friend â€“ Yes, if your friend is laid back and doesn’t need the usual crush of a typical Hoboken bar.

Overall – Wilton House is a true anomaly in Hoboken. In reality, it should have fallen to the wayside to make room for a upscale sports bar or a new outpost for “Cake Boss.” This bar feels like it should be the only neighborhood spot in a small suburban town. But alas, they have stood their ground and serve as a place to grab a super cheap beer and enjoy a game. All while people watching out their huge front windowâ€¦ Iâ€™ll give it a 6.0.