Spirits In The Sixth Borough: Moran’s 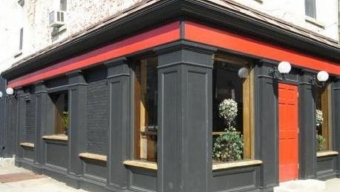 Spirits In the Sixth Borough: Morans

So as you can see we are certainly running out of days in 2011. Also its pretty apparent that I couldnâ€™t make it to every bar in Hoboken in 2011, but thatâ€™s not the purpose for this entry. Instead, let me introduce you to Moranâ€™s Pub. Located on Garden and 5th Street off the corner of Church Square Park, its possible that you walked by Moranâ€™s and didnâ€™t even realize it existedâ€¦but do yourself a favor jump inside and get a drink!

When I first moved to Hoboken and started taking classes at Stevens I used to walk right by Moranâ€™s all the time. In fact I didnâ€™t even know it was called Moranâ€™s because for a while they didnâ€™t have a name up anywhere (it’s now painted above the door on the Garden Street side). And because my class was on Monday nights, I didnâ€™t even know if the bar was ever openâ€¦after all they are closed on Mondaysâ€¦so donâ€™t come here for Monday Night Football. And the couple times I walked by midweek when it wasnâ€™t a Monday there werenâ€™t many people inside. So with all of those factors â€“ not open on Mondays, really small crowd, and no name up anywhere I actually thought it was some kind of social club. But after heading to Moranâ€™s on a Friday night after a year of walking by it all the time I was shocked. There was a lively crowd, and apparently they had a name!

Well that was my introduction to Moranâ€™s but let me tell you about my most recent visit. I headed over there with a group of four early on a Friday night during the holiday week. As expected considering most of Hoboken fled for the weekend, Moranâ€™s was empty. It was nice, choosing whatever seats we wanted at the bar. We got immediate attention and were served our drinks quickly. The bartender was really nice, and a proâ€™s pro when it comes to bartending. You could tell heâ€™s been doing this for a while. Heâ€™s got a nice long history in Hoboken bars. I had myself a Yuengling, while some other mixed drinks and scotches were drank. But really if you come to Moranâ€™s, stick with the beers or the scotch. Also if you are a Irish whiskey fan try the Red Breast.

The draw of Moranâ€™s is the neighborhood feel of the place. Its small and they donâ€™t serve food, but you can always grab a drink and catch up with friends. They have a few TVs mounted above the bar and are quickly on point in getting sports on TVs as the games starts. Even hockey games get put up on TV. Also, Moranâ€™s has a good dart board and there usually is someone around looking for a game.

After a few drinks it was time to leave. While we were basically the only people in the bar during our time there, if you go on most Fridays or Saturdays youâ€™ll see a great crowd, and if you go there other days and nights youâ€™ll still find someone to talk with.

Preconceived notion â€“Iâ€™ve been to Moranâ€™s before and I know it to be a neighborhood place. I had a feeling it wasnâ€™t going to be too crowded during the holiday weekend.

Music â€“ I think it was the bartenderâ€™s iPod. Good music.

Value â€“ Itâ€™s the type of place that if you got there a couple of times and show a good tip you will get great service, some heavy handed drinks and even some buybacks.

Date â€“ Maybe an informal date on a Friday or Saturday night.

First or last drink of the night â€“ One of the best places for a first or last.

Overall – Itâ€™s a ‘Cheers’ like atmosphere in Moranâ€™s. They are far enough from Washington Street that basically everyone who goes to Moranâ€™s is from Hoboken and is just a local who has been there before looking for a comfortable time. It was definitely a fun time and Iâ€™ll probably head back to Moranâ€™s one a busier night â€¦ Iâ€™ll give it an 8.4.