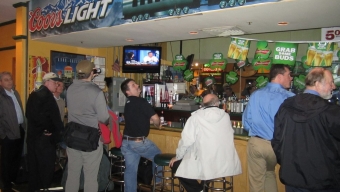 If you want to drink in the Hoboken area you literal have miles of streets filled with a variety of options. Hey, that’s why I started this blog in the first place! But, if you are waiting for a PATH or Light Rail train you really have only one option to get your drink on. It’s the Railhead Bar, Hoboken’s version of the commuter bar and damn does this place have character. Like most train station bars you are either going to stop in while waiting for a train, or just coming from one. In this case I had to go into Manhattan for a meeting so I had some time to spare and wanted to grab a beer. If you want to see something cool, and somewhat historic head inside via Hudson Place. There you will be able to see the classic entrance to the Lackawanna Station, with an ornate tower boasting it’s name.

The second you enter Railhead Bar you will notice this place is not for long stays. People are gathered at the bar quickly drinking down beers, while others are asking for brown bags to take on the train. Much of this constant motion is due to the clock by the front door blinking the time in red, and a TV screen telling you boarding times. So unless you’re on your on schedule it’s very hard to get settled here. Luckily the latter defines my visit here. I was taking the PATH that afternoon and could head to it whenever I wanted. This gave me the chance to literally drink in my surroundings. ‘Railhead’ has an open air feel, marketplace feel to it. Besides the bar there exist portable food stands, such as deli and even Thai food. It reminds me of a flea market but with booze.

Speaking of booze, ‘Railhead’ has a great selection at very reasonable prices. But, like with any bar I have reviewed there are certain rules of the road. Since this joint is built on speed and fast turn-over be prepared to bark your order out quickly and try to stick to bottled beer, or wine. Bottled beers such as Budweiser went for $4 a piece on a weekday afternoon. This is a great price for a train station bar, where you would expect to be ripped off at. So that’s a great factor here. Wine is served in one serving portion bottled, and poured into a plastic cup. I highly recommend you stick to either one of these two choices because the mixed drinks are both expensive, and watered down. Like I said this place is built for speed, not pleasure.

But in the end it’s the little things about, ‘Railhead’ that makes it a solid place when commuting. The bartenders were two cool women, with funny yet fiery personalities. While I was there some guy ran out on his bill and they jumped over the bar to chase him. This was damn cool. Also, it didn’t hurt that instead of the typical pop music you would expect, they were playing an actual CD with awesome 70s era Southern Rock. It even skipped a few times, and hey if that doesn’t give this place a ton of character I don’t know what does.

Crowd stereotype – The typical crowd is anyone riding a train over the age of 21 who needs to wet their whistle.

Value – Beers like Budweiser were $4, which is a great value, especially for a train station bar.

Date – If you’re the type of person who picks up your dates at train stations then your in luck.

Hookup – Highly unlikely. Unless you are a fan of ladies of the night.

Dance – Try and dance here during rush hour and either a burly commuter or cop will “kindly” ask you to stop.

Catch up with a friend – Perfect for either grabbing a drink with friends either before a train, or meeting after getting off one.

First or last drink of the night – It’s best to go here after work for happy hour and enjoy the people watching. Just don’t make a night out of it.

Overall – Railhead Bar isn’t trying to be anything more then a place to grab a beer before taking the train home. The prices are kept relatively cheap, allowing you to get a few pops in before hopping on board. The two female bartenders on duty were nice, and were a far cry from the type of worn out women one would expect from a place like this. So, win win…I’ll give it a 6.0