Spirits in the Sixth Borough: Helmers 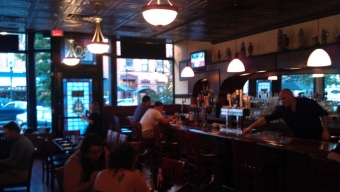 Spirits In the Sixth Borough: Helmer's 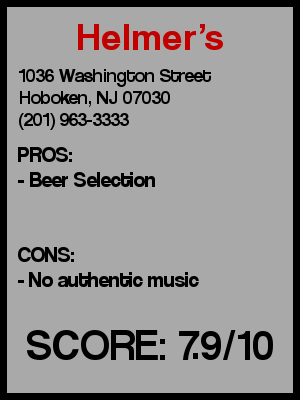 Helmers’, a true German bar and restaurant, has graced Hoboken with its presence for 75 years. Since just after the prohibition era, this bar located on Washington and 11th pays authentic homage to Hoboken’s German legacy. Nowadays most people think of Hoboken as an ethnic Italian neighborhood but it was the Germans who made up nearly 40% of the population prior to World War I working at the many riverfront factories and docks.

Walking into Helmers’, we were greeted by a friendly bald German man at the bar as I scanned the draught beers. I went with a Paulaner but was a little disappointed they did not have my favorite German beer, Hofbrau, on tap. Hofbrau became my favorite German beer as when I was in Munich for Oktoberfest. Â It was their beer tent that I spent many many hours in. I was drawn to their animated lion drinking beer and roaring above the entrance to their tent. Their beer was fantastic and I regularly seek out Hofbrau whenever I can.

Sitting at the bar in Helmers’ you can tell that the restaurant is either family run, or that the staff treats each other like family…or maybe a bit of both. The waitresses span generations, most of whom seem to be able to speak in German to each other. The friendly bartenders conversed with them as well in their native tongue. Above the bar were a couple of televisions with golf and the end of a baseball game on. Behind the bar was a full collection of beer glassware ensuring that you are drinking the finest German beer in the proper glass. Â Included in the glassware behind the bar was also Das Boot, the boot shaped glass that got some noteriety in the movie Beerfest.Â  Being that I was going out to dinner following these couple of drinks there was no way I was going to try Das Boot (and I dont even know if it’s just for show or for real use.) Also just for show there was a bunch of beer steins and a couple of Statue of Liberty statues. I thought that mix was pretty filtting as this bar is authentic German but now has become part of Hoboken’s American culture.

While drinking my second Paulaner I noticed a bunch of drinks being made with a mixture that included some Framboise, which is a raspberry liquor that gets combined with an Oatmeal Stout to form a Blackforest Beer. Being that we had dinner plans that seemed a little heavy as a before dinner drink but maybe Iâ€™ll stop by again and give that (or one of their other many authentic imports) a shot. I also fought off the urge to try the amazing smelling plate of onion rings and snuck out the side door.

Preconceived notion â€“ Never been there before, but I was looking forward to a friendly authentic, historic German bar.Â

Crowd stereotype â€“ We got there a little before dinner time. There were a few families (including those with children) having dinner inside and outside and a couple of 20-something guys sitting at the bar with us.

Value â€“ The beers are between decently priced to a little expensive, but they serve high quality beers. They do have happy hour specials of $5 beers.

Dance â€“ I would say only during Oktoberfest.

OverallÂ  – Being a big fan of history and neighborhood bars this place gets points from me.Â  Add in a great beer selection of Belgium, German, and Czech beers and itâ€™s a great place for a true beer drinker.Â  I may make another visit to try Das Boot or one of their Framboise infused drinks.Â  However, I was very disappointed in the music selectionâ€¦over the air radio?? In a German bar?? Give me some classic German tunes and increase the experience. 7.9.