Spirits in the Sixth Borough: The Turtle Club 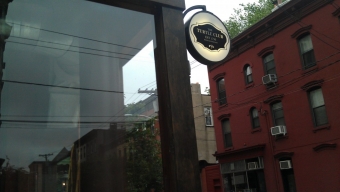 The Turtle Club, Hobokenâ€™s oldest drinking establishment (founded in 1796) recently came back into existence a couple of years ago and after one visit there, and I can tell you I am happy it’s back.Â  Located on the corner of Park Avenue and 10th Street, the Turtle Club took over the old Goldhawk spot.Â  The Goldhawk was one of the few places where you could hear good live local music in Hoboken, so its departure was widely bemoaned.Â  But the Turtle Club established a new identity and seems to be doing quite successfully.

When you enter the Turtle Club you can enter in the main room which has a semi open kitchen and some televisions. On the Saturday night we went to the Turtle Club there was a private party in that room, so I didnâ€™t get a chance to really look around. We were sent to the room to the right which had a nice bar in the corner and some low tables for 2 and some larger high top wooden tables. We were going to be a large party so we had reserved two of the large wooden tables for a few hours.

The place has a very old, classy feel to it- wood planked walls, white mosaic tile floors with small designs on it, and a wooden bar and tables fill the place.Â  Being on a corner there are windows letting in some sunlight (before it gets dark out).Â

The story of the Turtle Club is one that I find very interesting. Being a closet history buff (not like a civil war reenacter, but very into seeing historic places) I was drawn to the idea of â€œreopeningâ€ this historic social club.Â  Of course this place is unrelated (except in the name) to the original drinking club that started in Sybilâ€™s Cave in Hoboken with Colonel Stevens and some of the founding fathers of this country (Hamilton, Burr, John Jay), but what a great idea for a name.

The thing that separates the Turtle Club from a lot of the places that I have been to, is the fact that they have a truly amazing specialty drink menu. Our party ended up drinking a ton of them, but some of the all-stars were Dirty Hare (a spicy take on a martini), the Queen Anne, and the Fruits & Veggies.Â  I stuck with the Turtle Punch and the Louisville Lemonade which despite the relatively high costs, are packed with alcohol.Â  The drinks are made very professionally and the Terrapin Station were a big hit as they were served in tin cups that looked like a street beggar’s cup from the 1930s.

We spent most of the early evening from 5:30 to 9:30 drinking some fantastically originally and well made drinks and being merryâ€¦just like those great leaders of our country did in Hoboken centuries ago at The Turtle Club.

Preconceived notion â€“ Seemed like a nice neighborhood place from the outside.Â

Crowd stereotype â€“ At around 5:30 there was a couple of parents with their young children grabbing a bite to eat. Then for the next few hours it was mainly a dinner crowd but as the night wore on it was a 25 and up scene.

Music â€“ Donâ€™t really remember much of it.

Value â€“ They have specials during the week and a wine club. While we were there there were no specials. However, big thanks to the waitress who was able to keep everyone’s drinks straight so that people only had to pay for what they ordered.

Date â€“ Itâ€™s a great place to get a table, have some of their paninis or appetizers (the buffalo chicken dip is amazing) and get to know your date.

OverallÂ  – If you mix great classy drinks, some history, and a neighborhood feel, you got yourself a bar that I would be thrilled to go back to. I know a lot of people were disappointed when the Goldhawk closed but the Turtle Club was a much needed addition to the Hoboken bar scene. 9.0.