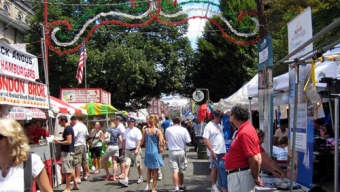 You know that I love my history, which is why I had to stop by the St. Annâ€™s festival last week to be a part of their 101st annual celebration.Â  St. Annâ€™s festival is a yearly tradition that takes place in western Hoboken primarily on Jefferson Street near 7th Street. Nothing says a religious festival like multiple nights of greasy food, cheap jewelry, bands, and of course booze.Â

The history behind the St. Annâ€™s festival traces back to Hobokenâ€™s deep Italian roots.Â  A large portion of an Italian town called Monte San Giacomo moved to Hoboken and the surrounding area and looking to keep traditions, friendships, and culture together, many of these new immigrants formed the St. Annâ€™s Society.Â  After building their own church at 7th Street and Jefferson the society instituted two feast days- St. Annâ€™s Feast and San Giacomo Feast- to go along with the annual St. Annâ€™s Festival.

Walking through 7th Street at the beginning of the festival, you take in nearly 1000 calories just from breathing in the air. There were stands selling their famous zeppoles, mozzerapas, kettle corn, and cheese fries with bacon grease all in a row. Depending on the type of eater you are, that either made you very very hungry or nauseous. I skipped by the food, and entered the parking lot behind the historic church to the alcohol tent.Â

The tent was guarded by Hobokenâ€™s finest who was making sure only those with wristbands has alcoholic beverages.Â  My friend and I walked to the tent and showed my ID.Â  It was nice to see members of the community working the bar. I assume they are all volunteers doing this as a way to raise money for the church and the charities associated with the church. I scanned the drink list and was surprised by the cost of some of the beers. The Miller Light draught was as expensive as some of the bottles of beer and the mixed drinks (which had great names) were about 8 bucks a piece.Â  In order to provide drinks in a quick fashion the mixed drinks were sitting in large Gatorade coolers. It made for quick service but the drinks donâ€™t come out as uniform as they probably should since I donâ€™t think anyone is stirring them; thus the drink tends to settle a bit.Â

They did have a ton of other mixed drinks to choose from but I ended up with their version of the Long Island Iced Tea. It set me back 8 bucks which was a little steep but I guess the money is going toward a good cause. However nothing can top the experience of drinking in a church parking lot while listening to carnival games and a live band (which I wish was in viewing angle from the alcohol tent).

Preconceived notion â€“ Despite living just a couple of blocks from the festival for a few years, I had never gone. Being that I was going on a Sunday night I figured it would be pretty dead, but I also expected that some people would have been there all day.

Crowd stereotype â€“ Lots of families and people in their late 20s and 30s.

Music â€“ Live music was being played on stage.

Value â€“ Very pricey but I figure some of the money is going back to the society.

Date â€“ Maybe itâ€™s a little different than your typical night out. But then again the whole festival is a little underwhelming unless you are into greasy food.

Dance â€“ Maybe near the band

First or last drink of the night â€“ Better for a first drink..

OverallÂ - It comes into town once a year and messes up traffic and parking for those on the west side of town. But it is a great tradition and is a great change of pace to the normally quiet Hoboken summer. If I picked a night other than a Sunday to go it probably would have been a little livelier but all in all it’s one of those things that every Hoboken resident should end up going to at some point 7.2