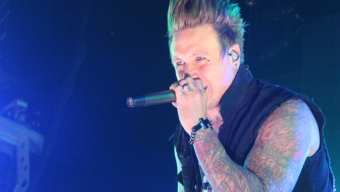 As the number of hard rock stations across the country have shifted formats, it’s made it fairly difficult for fans of the genre to both unearth new bands and also to follow along with the new releases of their favorite artists. Fortunately, there is no such challenge for SiriusXM subscribers where the ‘Octane’ channel has long continued along the righteous path of fulfilling the modern rock music fan’s appetite. Tuesday night, the rock channel streamed a co-headlining show on its airwaves across the country, recorded live at New York City’s Terminal 5. Led by two of rock music’s most successful acts over the past two decades, Papa Roach and Seether proved that they are doing everything in their power to keep the genre’s flame burning bright.

Following support from fellow bands Islander and Kyng, Seether opted to tackle the first of the two headlining slots on this run of dates and backed by an elaborate light show and stage setup, frontman Shaun Morgan and (recent LocalBozo.com interviewee) drummer John Humphrey flanked the rest of the band heading out to center stage. If you’ve never seen Seether in person, there isn’t much in the way of pomp and circumstance. Morgan intensely leads the show on guitar, but despite never moving much from his trademark position on stage right, it’s his live grunge-infused vocals which are most noticeable at each performance- steadily unwavering and downright excellent.

In support of 2014′s “Isolate and Medicate,” the band’s sixth release, Seether’s hour long set played out like a relentless string of greatest hits. The catchier, more upbeat tunes seemed to invigorate the live crowd as “Country Song” and “Tonight” set the stage for harder tracks like “Fake It” and unrelenting show closer “Remedy” to the delight of the live audience.  On the other hand, Morgan’s slower than usual solo take on “I’m Broken” was fairly underwhelming despite the song’s powerfully written chorus. But given that the remainder of the band’s set was fairly fast paced throughout starting with openers “Gasoline” and “Rise Above This,” perhaps their intention was to take the audience on more of a ride of songs with contrasting speeds. Either way, Seether as usual, was as good as advertised, riding the talented vocals of their enigmatic frontman to another stirring performance.

Though Seether’s Shaun Morgan is a man of few words with his audience, Papa Roach frontman Jacoby Shaddix is that sentiment’s antithesis. Decked out in garb from his new ‘Lovers are Lunatics’ clothing line, the tatted-up spike-haired singer exploded onto the stage for the band’s 75 minute set, bringing with him an uplifting energy level that never wavered during any of their 15 performed songs. The ability to overcome has long been a credo for Papa Roach, much of which is evidenced on their latest release “F.E.A.R (Face Everything And Rise)” which drops January 27th. And its that impassioned mindset that has Shaddix in perhaps the most positive place of his entire career. Just listen here- we asked.

Similarly, with seven album releases the challenge lies in the band’s ability to put together a setlist encompassing their entire career, which must prove entirely difficult for a band with a cavalcade of hit singles. In a bit of a surprise, four tracks from 2000′s “Infest” managed to made the cut, resonating with long time P-Roach fans. But down the line- “Getting Away With Murder,” Lifeline,” “Kick in the Teeth” and “…To Be Loved” all proved that they have staying power within the band’s high octane set. Certainly there were moments in “Forever” and the wildly popular “Scars” that veered more melodic- but the live crowd ate it all up in kind. And Shaddix’s frenzy of energy egged the audience on wildly as he repeatedly jumped to his center riser with his fist raised defiantly.

It was only fitting that the band’s most renowned rock anthem capped off nearly three and a half hours of pounding guitars and pummeled drum sticks. Moshers circled each other for one final time in the pit as the familiar lyrics rang out overhead to “Last Resort” and a wild free-for-all of rock fueled carnage ensued around the standing room floor. Just the way it should be. This is still rock music, after all.