Whores. Show Wild Side in Gramercy 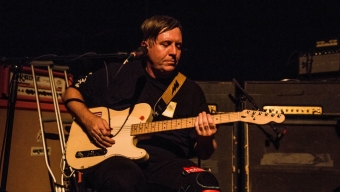 Summer won’t go away without a fight and even though the calendar has changed to September, Atlanta based rockers Whores. made New York City submit to their brutal brand of sonic distortion on a recent Friday night at the Gramercy Theatre.Â  The weekend show was unique from the get go as two of the three band members made their way to stage just fine while singer and guitarist Christian Lembach was forced to do so with the aid of crutches. Before the sold out sludgefest got under way, curious concert goers were told by Lembach that at the prior night’s show that he “ate shit” but did not want to let down his fans, band members or anyone involved with the tour.

Despite being planted on a metal folding chair and having his knee adorned with an appropriate “Fragile” sticker, Lembach’s inability to move on stage for the tour’s final show did not take away from the band’s stage presence in the slightest. After an ovation from the crowd as a thank you for his dedication and class the trio started to shred and decimate.

The ominous grumbling, rumbling, thick as a tar pit tone of Casey Maxwell’s bass shook the showroom and all of the bodies in it when “Playing Poor” opened the show.Â  From their 2016 first full length studio release “Gold,” the track powerfully punished and pummeled the audience early on. As a three piece band, when two members are restricted to seats, a performance can suffer but Maxwell’s perpetual kinetic output left you wondering if he was a human or a whirlwind of a hair and denim that was fueled by the vibrations of his own bass. Digging a bit deeper, the band went back to their first EP and pulled “Fake Life” out of the bag- a well-defined, hook filled song with a main riff that’s hard not to bang a head and a raise a horn for. Undeniable momentum continued to mount as drummer Donnie Adkinson delivered the thunder behind the kit for “Participation Trophy.” Practically exploding on his throne, booms of the bass drum, snaps of the snare and crashes of the cymbals had the power of Adkinson’s entire body behind them.

By the fourth song of the night, “I Am Not a Goal-Oriented Person,” it felt like the ferocious, vicious vibes were going to make the theater’s walls crumble as the band and their fans stomped it into fine layers of dust.Â Â ”Bloody Like the Day You Were Born,” “I Am an Amateur at Everything,” and “Tell Me Something Scientific” were the last three bombs in the ballistic barrage that was the Whores.’ set.Â  For just under an hour, Whores. launched what felt like eight pipe bombs filled with mud and shrapnel that left no attendee unscathed and unrocked. Post set, the sweat in air, messy hair across the crowd, and slightly disoriented look among the mass made the band’s namesake feel entirely appropriate. They got rocked real good. If this was the band at less than one hundred percent capacity, the world needs to keep an eye on its fault lines when Lembach gets back on his feet.