The Kills Show Their Steel in Williamsburg 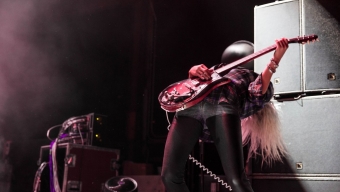 Following a blistering opening set at The Apollo Theater in support of Guns N Roses on Monday night, The Kills shook Brooklyn to its core from within the walls of Williamsburg‘s newest venue, Brooklyn Steel on Friday.Â  The duo’s headlining set was their latest stoop on their world tour in celebration of their fifteenth anniversary and eager fans braved the brutal heat and humidity by forming a line that wrapped around the venue to ensure prime spots right in front of the stage, on the standing room floor. Alison Mosshart and Jamie Hince were just as dynamic and charismatic as ever as they delivered over an hour of their trademark lo-fi, indie rock jams. Leaving none of their five albums untouched, fans were treated to an epic setlist that provided the perfect soundtrack to a steamy but memorable evening.

From the moment Mosshart took centerstage, she was immediately the show’s focal point – an absolute whirlwind, from her whipping blonde locks to her gracefully animated appendages, a blur you can’t help but focus on, especially with her entirely appropriate sweater that read- “God save America.” Â Hitting hard right from the start, the body rocking “Heart of a Dog” kicked off the show and instantaneously started what would become an evening-long dance party. The foot stomping and body bumping continued as Hince and his badass jacket stepped into the spotlight for the back and forth vocals on the ultra groovy “U.R. A Fever.” Â The shared vocals continued and Mosshart joined in on guitar with “Keep on Your Mean Side’s” slightly southern styled and beautifully bluesy “Kissy Kissy,” after which attention turned back to last year’s release “Ash and Ice” with intense, boogie inspiring renditions of “Hard Habit to Break” and “Impossible Tracks.”

The unbelievable aural storm continued to excite concert goers and whip them into a frenzy as Mosshart and Hince played classics like the illustrious vintage feeling “Baby Says” and appropriately adhered everyone together for the venue wide sing-along during “Midnight Boom’s” “Tape Song.” Â Mosshart made her way to the rear of the stage for the last song of the set, “Pots and Pans,” to take over on drums. Â The live crowd clapped along and still begged for more as the duo wrapped up an epic set and waved goodbye to Brooklyn for the evening.

Fittingly however, they returned to the stage after a few minute break for a generous five song encore that commenced with a beautiful and chilling acoustic rendition of “That Love” which Mosshart showcased in solo fashion. Â As the lights filled the stage, the rest of the band returned and tore into “Siberian Nights,” immediately reigniting the dance party. The rhythm picked up with the short and sweet “M.E.X.I.C.O.” tailed by the immensely fun “Sour Cherry.” The good vibes wrapped up with a powerful performance of “No Wow” that had the raucous crowd moving their bodies collectively until the song’s last note- the band once again lived up to their tremendous reputation of leaving no concert-goer left standing still throughout an energy-laced, in-your-face set.