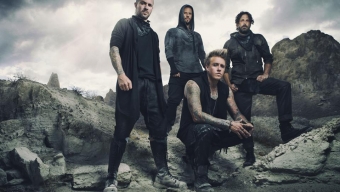 Tuesday January 27th marks the release of the seventh studio album from rock outfit Papa Roach, an admittedly polarizing band that’s been derided for everything from their moniker to their earliest days as the face of a now deceased rap rock genre. It’s fitting then that this album is titled with the abbreviation of “F.E.A.R.” or ‘Face Everything and Rise,’ which has proven to be more than a credo when fifteen years ago, a group of young no-name musicians with a cartoonish band name was catapulted to the forefront of rock music with the massive success of a single song. And with each album release, Papa Roach continues to show just how much they’ve evolved.

The 2015 edition of Papa Roach is a vastly different entity than the one that exploded onto our MTV2 screens in the year 2000. Though they’ve mostly moved beyond meshing hip hop with guitar riffs, the band’s penchant for writing catchy radio-friendly rock singles coupled with an unparalleled high octane live show has never been stronger. More of the same can be expected on the band’s latest release where tracks like “Face Everything and Rise” and “Broken as Me” (both available for streaming) are sure to appease longtime followers of the band and electrify audiences in any live setting.

Strategically, Papa Roach and Seether have slated a co-headlining North American jaunt that rolls through the beginning of February, with support from Kyng and Islander. And on Tuesday, January 20th, the four band bill is set to rock New York City’s Terminal 5- tickets are available now. With a new album set to drop and a return to Manhattan imminent, LocalBozo.com grabbed a few minutes with Papa Roach frontman Jacoby Shaddix for an exclusive interview. Listen in as we discuss the band’s creative approach to the new record, some of Jacoby’s favorite memories of playing in New York, how the tour with Seether came to be, the difficulty the band faced in trying to ditch the rap-rock stigma, if he gets tired of performing “Last Resort” and much much more. Make sure to grab your tickets for Papa Roach’s jam packed show at Terminal 5 on January 20th now!

(The Interview has been transcribed below for your reading pleasure)

LocalBozo.com: The new album drops on January 27th. Though it’s titled ‘F.E.A.R.,’ it stands for ‘Face Everything and Rise’- and much of the album from what I’ve heard is pretty uplifting. Talk about the band’s approach to creating this new record and how satisfied you are with the finished product.

Jacoby Shaddix: Very satisfied with the finished product. We definitely approached this record different than we approached any of our other records. We stepped into the studio with essentially nothing written but one chorus to a song called “Broken as Me” and we never do records like that. But the producer and Tobin [Esperance, Bass] and Tony [Palermo, Drums] were all about it. They were like ‘Cool, we could do that no problem.’ You know? And me and Jerry [Horton, Guitar] were kind of looking at ourselves like ‘What?’ So I just had to walk in with faith on that one and just go ‘Okay cool. I’m just gonna jump in this place’ and just see what happens. And we started working on that song ‘Broken as Me’ and as soon as we finished that song it was like a floodgate had opened inside me that was just a creative force that I just- never really experienced that before and I was mad driven man. And we were super stoked at the sound of the first track we recorded and so it was like off to the races after that. And the record just revealed itself over the course of the next two, three months.

LB: You mentioned “Broken as Me”- Papa Roach is a killer live band. The tracks that we’ve been able to stream- “F.E.A.R.” and even “Warriors” seem tailor made to be slotted anywhere in the band’s set and they’d fit in seamlessly with the rest of your catalog. How important is that to you during the writing process – whether or not a song can make the cut for one of the band’s live performances?

JS: We believe that live is the proving ground for rock and roll, and so that’s very important. We want to make music that translates to the live environment right off the bat. I think we’ve been doing this long enough now to know when something’s going to work or when it’s not. There were riffs where we just – ‘Eh, that’s not the deal dude. That’s not the jam, that’s not gonna fit what we’re trying to do.’ But then, when you’re in the studio it’s one thing so then you gotta go out there and really test it on the road and see what does work and so far we’ve been playing “Fear” and we’ve been playing “Broken as Me” and- they translate. They go over really well live.

LB. So you guys just launched a co-headlining run of dates with Seether through the beginning of February, with support from Kyng and Islander. Is this something that the two bands had pegged for a few years now- eventually going out on the road together?

JS: We’ve done a bunch of shows with them, touring and all that, you know? Showing up on festivals and doing shows and we were just looking for a band to team up with and the timing worked our perfect. So it was just like ‘Let’s go do this.’ And now that we’re out here, selling out shows, packing houses and giving the fans what they want, it’s been really good.

LB: Locally, the co-headlining run stops at New York City’s Terminal 5 on January 20th- Jacoby, you guys have been through Manhattan probably dozens of times over the last 15 years. What’s it like for you to play in New York City and are there any specific memories you’d like to share with us about performing here?

JS: I love the city man. The city’s just- it’s unique. That’s the only place that feels like that. It’s a one of a kind place. It’s got that energy, that creative force that’s just alive there. The fans there are always off the chain. We always have really good shows in New York. Last time we were there, we were with Stone Sour (2013) so we’re stoked to come back. We’ve had great memories man. I was there the year 2000 New Years Eve. We played MTV when the ball dropped and that was quite a fuckin’ night for us.

LB: You’ve got some dates lined up through the beginning of February- but you guys are road dogs so I’m sure this is just the beginning of your touring cycle. What’s up for the band when this run with Seether wraps up?

LB: The band has made some real artistic strides over the past 15 years- how difficult was it for you personally to overcome the stigma that initially pegged you guys solely as a rap-rock band?

JS: You know it took us some years to really prove ourselves. But you know- we stuck it out dude and we wanted to prove ourselves as a valid rock and roll band- and I believe we have at this point in our careers. So now it’s like ‘What’s next?’ Anything goes. And I think that for us, it’s like we’re at a place in our career where we feel just freedom as a rock band. We’re our own band and we do our own thing and we have our fans and we always got a chance to win over new fans and so- come check us out. You know what I mean?

LB: What’s one thing left that you’d like to see this band do that you haven’t yet done?

LB: It’s not that far off man. Last one. Â Be honest: do you still enjoy singing “Last Resort” night after night?

JS: Dude, it’s a straight classic man. You know? There’s a lot of bands that try their whole careers to have a classic track and we came out the gates and had one right off the bat. We definitely feel blessed to have that in our arsenal as a rock band. It’s still relevant today, you know? It resonates with the youth, it resonates with our fan base, it ignites an audience every time we play it- no matter what. Anytime.

LB: It was the soundtrack to my high school years. I have a place in my heart for that song. I’ve been a big fan of the band for a long time- it’s been my pleasure talking with you today. Is there anything you’d like to leave for the readers of LocalBozo.com?

JS: You know, in the process of doing this record- kind of stepping out and doing some other things creatively. [I've] Been co-directing the music videos on this album cycle. [I] Did that for ‘Face Everything and Rise’ and we’re coming up with the concept and getting ready to shoot another video for a song called ‘Gravity.’ So I’m stoked about doing that creatively. And then also I released a clothing line called ‘Lovers are Lunatics’ and released that in November of last year- just doing a straight DIY from the ground up, just me and my partner from Detroit. It’s rock and roll inspired street wear. So [I'm] just doing a couple things outside of Papa Roach that’s creative, that’s fun, that doesn’t get in the way of what I do creatively with my band because I’m not the type of guy that needs to start a musical side project. You know what I mean? P-Roach- I get to do everything I want to do.

LB: Papa Roach has put out some of the most commercially successful but also anthemic rock songs over the last two decades and they’re returning to New York City on January 20th at Terminal 5 as part of a jam packed co-headlining bill with Seether. Tickets are available now. Make sure to pick up the brand new Papa Roach album “FEAR” when it drops on Tuesday, January 27th. Jacoby – great speaking with you today man. Can’t wait to catch you in New York.

JS: Alright word man. Have a good one.