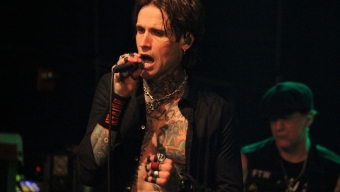 A late change in venue hardly affected the sizable crowd gathered at the Gramercy Theatre on Tuesday night for a show featuring two bands on a bill that are likely more similar than they are different. Continuing to tour in support of the release of 2013′s “Confessions,” Los Angeles’ Buckcherry brought the members of Fozzy along for the rock music showcase.  But regardless of which band was on stage, it was nearly impossible to take your eyes off of either frontman.

It’s always funny watching fans in attendance at a Fozzy concert when they realize that the band’s lead singer looks familiar. And again, once they recognize him as WWE superstar turned television personality turned serious rock star frontman Chris Jericho. Donning his now trademark colorfully illuminated jacket, the jacked singer and his four bandmates hit the New York City stage for nearly an hour, touring in support of their band new single “Lights Go Out” from their forthcoming record “Do You Wanna Start a War?”, which remarkably will be the group’s fourth of entirely original material. Though they’ve been making music together since the turn of the century, Jericho’s sole devotion to his music makes the band feel like fresh up and comers amid an increasingly tired rock music scene.

You’d be hard pressed to find a more energetic or charismatic live performer than Chris Jericho- a testament to the skills that he honed in the ring. The band’s eleven song set balanced the group’s previous efforts, which truly shined on tracks like “She’s My Addiction” and “Spider in My Mouth” from 2012′s “Sin and Bones.” Perpetually between songs, the vocal audience would chant ‘Fozzy, Fozzy’ toward the stage to the utter delight of the impassioned vocalist- though the dueling guitars of supremely underrated Rich Ward and Billy Grey were equally to blame for garnering the audience’s fervor. Fan favorites “Enemy” and “Sandpaper,” which may have actually featured the M. Shadows vocal track being played during the performance were undoubted highlights for a band that while still fine tuning their live act, has certainly come a long way. And we’re just as excited as anyone to see where Fozzy heads next.

Alternatively, the five members of Buckcherry (despite a recent switch at bass) are as polished and fine tuned a live act as there is in the genre, evidenced by an eighty minute set that may have leaned a bit heavy on their latest album, but was rife with hit songs from the past two decades. Without warning, the band opened with a fiery version of “Lit Up” which is typically reserved to close the night out. But nothing on this night was typical- (the strange but fitting covers of AC/DC’s “Big Balls” and Icona Pop’s “I Don’t Care” were pleasant surprises)- except for the band’s penchant for putting on a great live show regardless of circumstance.

The sixteen song set represented pieces of each of the group’s six albums, from the familiar and fantastic (“Everything,” “Ridin”) to the lesser known (“Recovery,” “Water”) and the only miss of the bunch was the acoustic “Dreamin’ of You” which fell a bit flat in this setting. But that aside, Buckcherry’s energy level was remarkable throughout their performance with “Frontside” and “All Night Long” coupled with the fast-paced and gritty “Dirty Mind” as standouts early in the show. The band’s first single from “Confessions”- “Gluttony”- was also relentlessly unforgiving and generated a warm ovation from the excited crowd.

Though the band’s biggest commercially charting success to date is technically a ballad, “Sorry” is always an excellent addition to the set- and always manages to have a room full of guys singing the lyrics aloud. Fittingly, the band teased The Rolling Stones’ “Miss You,” before closing the main set with the defiant “Crazy Bitch” and concluding with an unabashed ode to their former party lifestyles with an inspired version of “Too Drunk…” With a typically relentless touring schedule, Buckcherry is a band that always seems to deliver with their live shows and then some. Based on their tremendous catalog of hits alone, it’s fairly absurd that the band doesn’t draw far larger audiences in New York City, where fair-weathered music fans tend to flock to the next new thing at every turn. But for longtime fans that appreciate the band considering the many obstacles they’ve overcome to this point in their careers, we’re just happy to have them continually pumping out new music and dropping by our Metropolis to wow us again every so often.