Fozzy at The Gramercy Theatre: A LocalBozo.com Concert Review 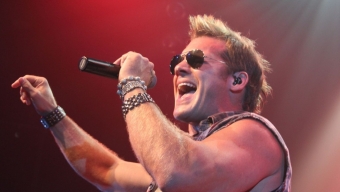 With a night off between dates of the Uproar Festival, wrestler and rock star Chris Jericho led his band Fozzy into New York City for a one off headlining show at the Gramercy Theatre on Thursday night. Despite an abbreviated support slot on the touring circuit, the band welcomed a full 75 minute set showcasing the highlights of the band’s first three albums with a special emphasis on the newly released “Sin and Bones” (August 14th). The album struck the top spot on the Billboard Heatseekers Chart off the heels of lead single “Sandpaper”- featuring guest vocals from Avenged Sevenfold’s M. Shadows- and has propelled the band to perhaps their greatest heights yet.

As anticipation for the first glimpse of Fozzy grew nearer, the fans tightly packed into the small theater wasted little time in chanting familiar WWE chants toward an empty stage. With stage lights turning from dim to bright red, each band member took their spot up front, with the enigmatic Jericho finally joining them for a rocking rendition of opener, “Spider in My Mouth.” Outfitted in sunglasses and a perfectly quaffed blonde fo-hawk, the singer took the stage with a fury, his arms popping out from underneath the classic John Lennon ‘New York City’ t-shirt beneath his sleeveless plaid shirt. Although Jericho certainly had the look down pat, it was easy for fans to revel in his excitement performing on this night, as he feverishly ran about the stage with almost too much energy for his own good.

While wrestling t-shirts could be spotted all over the audience and with Jericho the likely draw to the show, it was the backing band of Fozzy that deserves much of the praise. Guitarist Rich Ward effortlessly wrecked the mostly tepid crowd over and over with ear-splitting riffs on songs like “Eat the Rich” and “To Kill a Stranger,” while Paul Di Leo’s thumping bass proficiently backed each track of the set. Fozzy’s strongest suit is meshing some of hard rock music’s sweetest licks with catchy, melodic choruses, which the frontman has described as a ‘Metallica meets Journey’ collaboration.

Jericho meanwhile, capably kept up with the band as his vocals shined especially when getting backing help from his mates onstage. His charisma however was on display throughout. The awesome “She’s My Addiction” was prefaced by Jericho’s musings: “Who’s got ‘Sin and Bones?’ If you don’t have it, lie and say you do. Now who’s got ‘Sin and Bones?’ (raucous applause). Just what I thought- every one of you.” The highlights of Fozzy’s performance revolved around cuts from the new album as the aforementioned “Sandpaper,” despite being performed second, awoke the crowd quickly and energetically, while the infectious “Blood Happens” and “Sin and Bones” sandwiched a brief encore break. When it became clear the band’s final song was upon us, the crowd erupted, begging Jericho and company to play their undisputed biggest hit, “Enemy.” After a short bit of teasing, the band obliged, ripping out the catchy, familiar number to the crowd’s delight. Jericho began a bit uncomfortably with his earpiece inserted as the song commenced, but once aggressively removing it, he became at ease, nailing the song’s difficult range as his audience sang along with him.

Erasing the stigma of this being a ‘wrestler’s band’ has been no easy task for this talented group of musicians, as our interview with Chris Jericho from a few weeks back will reveal. But Fozzy is a collection of talented players and performers that are still harnessing all of their skills show by show. While their singer’s proclivity for performing live is no secret, his sole dedication to this band and away from the ring at this point in his career will only help them to jell together more cohesively. And despite a relatively quiet crowd for much of the evening (through no fault of the band), Fozzy seemed to genuinely appreciate the turnout for the band’s headlining show in Manhattan. Said Jericho, “New York City has always been Fozzy’s second home in the United States, from when we played here the very first time years and years ago.” And after a set that saw the forty-one year old singer having as much fun as a kid on stage, he instructed, “never stop living your dreams.” It’s evident, especially on this night, that he’s clearly living his.