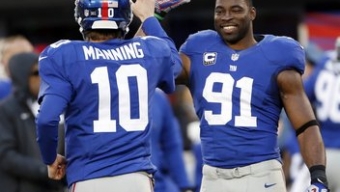 LocalBozo.com’s special beat reporter Jordan Rubenstein will be covering the New York Jets all season long, with quarterly season recaps about where the team is headed. We’ll also have reporter Tim Sachs tackling the New York Giants head on as we bring you all local NFL coverage heading to the upcoming ‘Big Game’ held at MetLife Stadium in 2014. We look back at both teams’ first half season of play and ahead to what the remainder of the season holds in store. 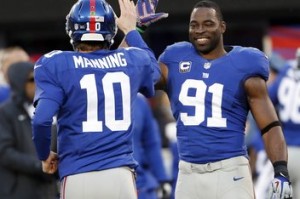 We’ve entered the midway point in the 2013 NFL season, the part of the year that typically separates the pretenders and the contenders. It’s been a trying year to date for New York Giants fans, starting a new year with an 0-6 start before reeling off two particularly ugly wins heading into their bye week. But in the NFL, momentum is everything and a W is a W regardless of any deductions for style points in getting there. And following an in-season trade for Panthers linebacker Jon Beason, the defense certainly feels rejuvenated. Before we begin to crown the Giants as NFC East champions though, it’s important to recognize that a lot has to fall into place for this team to make any sort of run.

The Giants already have six losses. Eli Manning leads the league in interceptions. The team’s starting running back tandem was out of football earlier this year. The defense has been as leaky as a sieve at times. And yet, somehow, there is still hope. In their last two games, both wins, the Giants have held teams to a combined 14 points, 7 of which came on one of the worst fluke snaps you’ll ever see. In their last two games, Manning has not turned the ball over through the air, despite throwing just one touchdown pass over that span and averaging a pedestrian 220 yards per game. But despite their losing ways, the New York Giants remain perhaps the scariest 2-6 team in the league, one capable of going off at any moment- and for fans, each new week brings that potential with it.

The team opened the season’s second quarter with two uninspired back to back losses against the Eagles and Bears, putting up 21 points in each defeat. But the woeful Vikings and a trip to Philadelphia may have done the trick to begin the 2013 season turnaround. With the Eagles slaughtering the Oakland Raiders on Sunday, the black and silver secondary may be just what the doctor ordered for the struggling Manning who has failed to put together a string of consistency thus far.

New York is fortunate to host three home games right from the break, one of which is NFC East division leader the Dallas Cowboys, who are similarly not running far away from the pack with a 5-4 record. Speaking of pack, the Green Bay Packers also come to town in that same stretch in a game, which is by no means a gimme. Further down the line, the Giants still have two division battles remaining with the Redskins, and tough contests with the Seahawks and road games at the surprising Lions and Chargers, both of whom could be primed for playoff spots. While my preseason prediction looks to be a stretch for the G-Men to make it to 8 wins, especially considering the difficult schedule coming up, a 6-2 finish is certainly not impossible.

In a league where momentum is everything, the Giants look to be finally putting things together in the way the Giants love to win- running the ball effectively and playing strong defense. When the team’s running game opens up, Manning is at his most dangerous with Hakeem Nicks and Victor Cruz poised to explode with a long touchdown catch at any time. That Nicks has not had a touchdown in a contract year is downright shocking during a time when most free agents tend to set career highs across the board, in anticipation of their next big contract. And while Cruz has earned every bit of his new deal signed this offseason and then some, it hasn’t been enough to translate to victories. Expect Nicks’ big season to come in the next eight games. 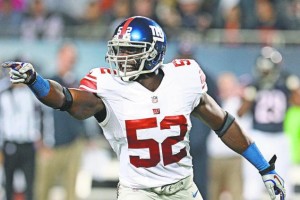 Defensively, the team’s trade for Beason was a brilliant move as his familiar name joins a cast of virtual unknowns in the linebacking corps. Coupled with Justin Tuck’s re-emergence as a quarterbacking terror, the team’s overall play on defense has vastly improved since Beason’s arrival. All he’s done since donning his blue uniform is lead the team in tackles in two of his first three games in New York. With 11 tackles in week 8, the resurgent Terrell Thomas has also been a necessary superstar for a team that drafted him to play as such. After three ACL surgeries on the same knee, Thomas’ play has helped mold the secondary into a capable unit with Will Hill and Prince Amukamara seemingly following suit.

Although the G-Men remain just two games back of the Cowboys, with the Redskins and Eagles equally sputtering along, the division is somehow still in play. And with the weapons this team has on offense, there’s no telling when they will unleash upon the rest of the league. At 2-6 and looking up from the bottom of a shaky division, the word of the day is hope for this Giants team. Hope that they will take care of business and hope that all of the remaining pieces fall into place. Based upon head coach Tom Coughlin’s track record, we’re always inclined to give them the benefit of the doubt.