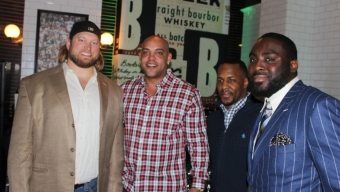 Two of the most stunning members of the New York Jets Flight Crew cheerleading squad stood perched at the front doors to Italian restaurant Lugo Cucina Italiana on Saturday evening. While the Patriots and Seahawks were gearing up for a riveting run in the Super Bowl, members of Gang Green assembled over the course of the weekend for “Jets House II,” an interactive opportunity for fans and players to meet, drink and chat it up. Though the event was decidedly high end, fans donning their favorite green and white jerseys were more than appropriately dressed for the exclusive atmosphere inside.

As an idea that spawned in 2014 when the New York area played host to the Big Game, the second annual “Jets House” transformed the traditional Italian restaurant into a Jets fan’s dream. Live action game day photos were plastered on each wall around the space with team helmets and other knick-knacks methodically decorating just about every inch of the Midtown eatery. The most appropriate piece on display was the team’s actual trophy from their first and only Super Bowl victory back in 1968.

When attendees weren’t posing for photos with cheerleaders or hob-nobbing with the likes of Nick Mangold and Demario Davis, they were free to enjoy a premium open bar and all inclusive tastes from the restaurant . The smells of delicious trays of rigatoni, flatbread pizzas and sauce covered meatballs were superceded only by the tastes that accomapnied them as the evening’s house DJ filled in the surrounding mood with the use of his turntable. Despite current and former players in attendance, most fans in the house remained calm, taking in their surroundings and making sure to enjoy the special evening.

Other stars from the team’s storied past and present made the rounds over the course of the weekend from Geno Smith and Muhummad Wilkerson to Joe Klecko and Freeman McNeil. We managed to spot guard Brian Winters and former quarterback Ray Lucas during the busy Saturday session chatting casually and posing for fan photographs here and there. Although there wasn’t much for fans to celebrate during the season, the New York Jets often find other ways to give back to some of their most avid supporters. At the second annual “Jets House,” there wasn’t a fan or a player in attendence that wasn’t enjoying his or herself- a testament to the team’s commitment to their loyal fanbase, despite a disappointing year.