Heating up the Hot Stove at ‘Pitch: Talks’ 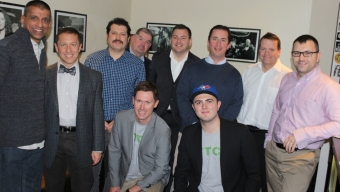 Though it’s the middle of January, throngs of New York sports fans flocked to Times Square Wednesday night donning their favorite baseball jerseys, hats and t-shirts as the hot stove talk was heating up a chilly winter night in New York City. The famed B.B. King’s would be transformed from intimate concert venue to a lengthy and detailed discussion of all things Major League Baseball, hosted by some of the country’s most acclaimed sportswriters and talking heads on the subject. The evening titled ‘Pitch: Talks on Baseball’ was the sole local stop for the traveling panel which originated in Toronto but is poised to stop at different baseball hotbeds around the country with a shuffling lineup of notable speakers.
The evening kicked off with the introduction of Boston Globe writer Pete Abraham, who would serve as the program’s moderator for each of the three separate panel discussions. To his credit, Abraham kept the discourse moving along smoothly as he posed a litany of questions at each of the writers that surrounded him and kept each of the participants engaged throughout the course of the evening. ‘Pitch: Talks’ kicked off with the arrival of three of baseball’s nationally recognized personalities- ESPN Senior Writer Buster Olney, FOX Sports Senior Writer Ken Rosenthal and Sports Illustrated contributor and Hall of Fame aficionado Jay Jaffe. For nearly forty-five minutes, the quartet kicked around the rumor mill from the remaining free agents – nobody knows which team will emerge from the fray to pay Max Scherzer or James Shields- to the pending backlog of Hall of Famers and prospective users of performance enhancing drugs. (Olney believes that once Mike Piazza is voted in- likely next year- that the dam will break on all suspected PED users)

Following a brief intermission, the talk turned to the local teams. A room filled with disgruntled New York Mets fans expressed their displeasure first as the enthusiastic crowd clamored for the Wilpons to sell the team. Buster Olney returned to the stage, flanked by ESPN’s Adam Rubin and Sportsnet NY’s Matthew Cerrone to quell much of the sentiment- proclaiming that Commissioner Bud Selig‘s relationship with the Wilpon family and their strident content with owning the Mets would prevent a change of ownership from ever taking place. The questions from there shifted to the Mets’ farm system, general manager Sandy Alderson‘s unwillingness to trade the team’s young pitching and the contingency plan at shortstop heading into 2015. The panel managed to agree that this is the make or break year for manager Terry Collins and that the team projects to be above .500 and potentially be in the hunt in September, which would make this season a successful one for the perennially disappointing Flushing team.

Closing out the evening, Abraham welcomed Jaffe back to the stage for another 45 minutes of conversation about the New York Yankees. The New York Times’ Tyler Kepner and WFAN’s Sweeny Murti would commiserate over the state of the Bronx Bombers, who seem to enter spring training with a multitude of question marks despite the team’s best infield defense in years. Unsurprisingly, much of the early chatter revolved around the return of Alex Rodriquez, suspended for 2014 for a number of performance enhancing drug related reasons. Kepner implied that if Rodriquez could return to fairly pedestrian numbers (.250, 15 home runs, 60 rbis), then this season would be deemed a satisfying one, despite a contract that pays him $61 million over the next three years. The guessing continued on the bounce back years for veterans Mark Teixeira, CC Sabathia and the recovery of Masahiro Tanaka to stabilize a team that has lost its identity with the retirement of its four home grown stars Jeter, Rivera, Posada and Pettitte over the last few years.

Each of the three sessions was both fun and informative, giving fans their own personal window to watch an episode of Baseball Tonight unfold right in front of them. Best of all, attendees were able to ask their own questions of each panel which was particularly revelatory in that it seems all New York baseball fans are hungry for a winner and are frustrated with some of the decisions made by ownership and the selfishness of some players. In the country’s largest market, our baseball teams owe the fans more than medicority on the diamond and only time will tell if things will be any different in 2015.