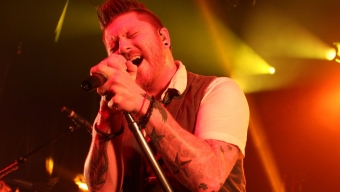 I had just flown back into town at 5am on Tuesday morning after four long nights in Las Vegas, two more nights than I had any business staying for. I was beat up, broke, and absolutely exhausted. And so when the prospect of another late night came about on Thursday at Irving Plaza, let’s just say that I was less than exhilarated in looking at the hours that stood in front of me. That was, until Hinder took center stage as the headlining act on this night, and as they ran through their hour long set featuring hit song after hit song, I remembered just how much fun a rock show could be.

The four band bill opened at 7:30pm with rockers Open Air Stereo setting the pace for Devour the Day, whom you might recall was interviewed by our outlet just a few weeks back. Touring on the heels of this year’s debut release “Time and Pressure,” the band’s half hour set showed a group still unpolished and still finding their voice on stage, but also with enough raw potential to make good on their talents. Made up from former members of Egypt Central, boyish frontman Blake Allison and bassist Joey Chicago controlled the front of the stage from the show’s open with “Get Out of My Way” and “Handshakes and Fist Fights.” But the band’s signature track to date “Good Man” was clearly the exclamation point for a band just beginning to get a groundswell of fandom.

As one band is just beginning to make a name for themselves, rock music stalwarts Candlebox are celebrating the twentieth anniversary of the release of their self-titled debut album. Out last to the stage was frontman Kevin Martin, casually wearing a baseball cap like this was just another show. But as the openers were raw and gritty, Candlebox has never sounded more in-sync or musically proficient. Guitarist Peter Klett’s shredding solos make onlookers take notice behind the high pitched voice of Martin, whose songs like “Arrow” and “Cover Me” never seem to age. Meanwhile, Candlebox also touched on some newer material from 2012’s “Love Stories and Other Musings” with the likes of “Turn Your Heart Around” and “She Come Over Me.” But they appeased everyone that waited for them, closing with “You” and “Far Behind,” their massively successful singles in a bit of back to back rock nostalgia. Martin proclaimed that the band might not be back in town for quite awhile, but he made sure they made the most of their time in New York City on this night.

A minor detail like replacing the lead singer and the face of a band and still going on tour seemed to matter very little during Hinder’s headlining set. With frontman Austin Winkler stepping away to battle ‘personal issues,’ the band tapped Saving Abel’s Jared Weeks to handle the vocal duties on this tour. And while the band certainly looked a little bit different up there, Weeks proved a more than capable replacement singer for this run of dates. Backed by a light show fight for an arena tour, the band ran through their list of notable hits to the delight of the small but vociferous crowd as the new singer egged them on. Opener “Up All Night” was a party-rocking call to arms, as Weeks’ deep gravelly voice did Winkler’s vocals proud in a live setting and tracks like “Whatcha Gonna Do” and “Use Me” kept the raucous affair going.

In a pleasant surprise, Hinder also sprinkled in some Saving Abel tracks with their two biggest hits- a rocking version of “The Sex is Good” and the always catchy “Addicted,” which put the band on the map. Lead guitarist Joe Garvey pounded his six strings, his sweaty hair flopping in his face as he teased Weeks about his on stage attire. Even drummer Cody Hanson got into the mix by coming out front and explaining Winkler’s absence and building audience confidence in Weeks, although candidly, it wasn’t needed. The band plodded through hits “Lips of an Angel,” “Better Than Me,” and head-pounding sing-along “All-American Nightmare,” before closing with a rousing rendition of “Get Stoned.”

The show wrapped as the clock approached midnight and every time I thought ‘Okay, I’ll leave after the next song,’ Hinder ripped out another familiar track that made me dance around in place and stick around a little bit longer. Although their lead singer’s absence brought a slightly less sexy live show to New York City, the band seems to have rallied around Jared Weeks, who for our money earned his spot on stage next to Hinder during this performance. After that, I looked down and checked my watch and the band was right. It was time to ‘go home,