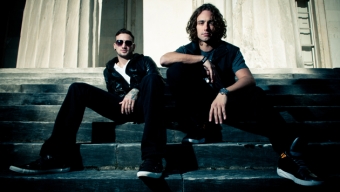 I t’s often been said that a Phoenix can rise from the ashes of the fallen. If that’s true, “Good Man,” the first single from the newly formed rock band Devour the Day may be just the song that catapults the former members of Egypt Central to greater heights. Devour the Day’s recent release “Time and Pressure” picks up right where their former band leaves off- despite some seismic shifts in the band’s makeup.

Though the newly formed entity makes up roughly 3/4ths of the previous group, it’s drummer Blake Allison’s emergence as the band’s new lead guitarist and frontman whose transition is most startling. Hidden behind the vocals of former frontman John Falls, Allison voice was rendered silent on previous efforts, not all that dissimilar to the musical journey of Nirvana’s Dave Grohl whose about-face turned him from supporting player to the focal point of the Foo Fighters. And while Allison’s shift of instrument has yet to be that dramatic, his undeniable vocal presence punctuated by his strong songwriting alongside writing mate and bassist Joey Chicago makes Devour the Day’s debut album and their hit lead single that much more memorable.

The band hits the road as the support act on a co-headlining bill featuring rock acts Hinder and Candlebox, each of whom has had their own share of success in the spotlight- something that Devour the Day can only hope to emulate. But if their track record with their previous band and their newly released debut album is any indication, Devour the Day is a band poised for a run in a hard rock genre destined to have a renaissance.

LocalBozo.com had the opportunity to sit down with Devour the Day frontman Blake Allison for an exclusive interview. Listen in as we discuss the formation of the new band, the transition from drummer to frontman, the band’s approach to creating music, touring with Candlebox and Hinder, why New York City is just another stop on the road for the band and so much more. The Candlebox/Hinder Tour featuring support from Devour the Day stops locally at New York City’s Irving Plaza on Tuesday, September 26th and tickets are available now. And for more information on Devour the Day, check out devourtheday.com.

LocalBozo.com: Blake you had a long run as the drummer for Egypt Central before forming this new project. The break up was announced at the end of last year- how long has Devour the Day been in the works?

Blake Allison: I would say honestly that this band has been forming since 2001 because Joey [Chicago] and I have always written together and that was our primary job in our previous band. So when that band fell apart, things really didn’t change for Joey and I. We just continued to write, create as we always did. The only difference is that when we perform it, I’m singing it, the way we demo songs out. We don’t feel like this thing is any different than the previous band- we just picked up where we left off and I changed positions.

LocalBozo.com: You go from being the drummer in one band to being the vocals and guitarist for another – a la Dave Grohl. Had you always had aspirations to be a frontman or is this more just a circumstance of forming a new band?

BA: I can’t honestly say that it hasn’t been in the back of my mind when I started playing music. I’ve always that they had the easiest job, you know? I’m lugging all these drums around and sweating my ass off behind this drum set and this guy just walks in and doesn’t lift a finger and starts singing a song, and the set’s over with and he gets all the attention. So I was always kind of like ‘man, I’m jealous of that guy- he doesn’t have to do anything.’ And then, the first week of being a frontman I realized it’s one of the hardest jobs on the planet because the vocal is such a fickle thing. It can be great one day and be disastrous the next. And your face is out there and if you don’t sound as good as you want, you’ve got to take the heat for all that. It’s nerve-racking but I love this music and I love the guys I’m with. I wouldn’t ask to be anywhere else. I’ve always wanted to do it and I’m really really excited to be able to get up there and live out that dream.

LocalBozo.com: What did you find most different in the writing and recording for Time & Pressure” versus your time in previous bands? Did you notice that you were writing a different way to suit your own voice?

BA: I was still discovering what parts of my voice sounded good with the different colors of music that we were putting together and I still am. I had to pull a little triple duty in the writing process but it didn’t really matter because even though that was, it seemed to go quicker because- I don’t know- you’ve got so many cooks in the kitchen and I guess that screws up whatever you’re putting together. When the record was, I would say, like 80% done, Joey and I took a step back and realized that we were proud of the fact that we did that ourselves. And we had found a new voice for the music that we were putting together and we were so excited to be able to say that we did it by ourselves.

LocalBozo.com: In 2013, it’s incredibly difficult for a new band to catch on but that’s what Devour the Day certainly seems to have done with first single “Good Man,” probably as good as any rock single released so far this year. When you guys put the finishing touches on the song, did you realize you had a single on your hands?

BA: I wouldn’t say that we knew that we had a single. We just knew that we had a strong song. I have such a hard time picking singles when it comes to our music. It always seems like the ones that I like the most are the ones that when the professionals pick out, they go ‘nah that one doesn’t have the sort of appeal that you would think.’ So I kind of don’t like to think of songs as singles or not singles. I just like to think of them as ‘this is either a quality song that I can play in front of my father’ and have him say ‘that’s a good song’ or not. He’s kind of my barometer.

LocalBozo.com: You guys just got booked up on tour with Candlebox and Hinder- almost like a tour that spans the 90’s the 2000’s and with you guys present day- how’d this bill come about?

BA: We all have the same agency group or booking agent I should say. The Hinder guys are friends of ours from a long time ago. Egypt Central used to tour with them so when this band decided that it was time to hit the road, I gave Cody [Hanson] , Hinder’s drummer a call and I said ‘hey man, I’ve got this new group. Here’s the music and if you like it, please take us out on tour.’ And that was our first run, was with those guys. And we’ve been touring for this year and our new camp is easier to work with than our previous so I don’t think that they had any problems with continuing to tour with us and of course we didn’t- ‘cause they’re such awesome guys. And we like the way that they do things. Candlebox is a band that- like the first band that I ever listened to- ever, so I was so excited to be able to tour with them too.

LocalBozo.com: As it pertains to your live show, how is the new material being received by crowds?

BA: Because of the way our music is diversified on our record, we are still trying to put together the kind of set that would appeal to the kind of crowd. We’ve toured with so many different bands thus far. We’ve toured with Sevendust and Sevendust is primarily heavy so we put together a heavier set. We’re currently on tour with Theory of a Deadman so we put together more of an in the middle kind of set- heavy and still vocally or melodically driven kind of set. And with Hinder, we wanted to put together more of a female audience oriented set. So we’re still figuring it out, but every show goes over great. We’re putting songs that appeal to the crowd out there. We’re changing our set up every day to fit that.

LocalBozo.com: The tour stops locally in New York at Irving Plaza on Thursday, September 26th. What are some of your memories of playing in New York City and is there anything specifically you like to check out while you’re here or is it just another stop on the road?

BA: I have to say it’s just another stop unfortunately. We’ve spent a lot of time in New York, but I’ve only been able to go out in New York maybe once or twice. And I’ve enjoyed that- I mean, New York there’s no other place like it. Hopefully one day in the future I’ll be able to spend some time and walk the streets. Thus far, we’ve only played our show and then we’ve had to go.

LocalBozo.com: Now the band’s been doing some radio and festival shows during the summer, and this tour wraps in the early fall- what are your upcoming plans for the end of this year?

BA: Hopefully Joey and I will be able to go home and take a nap- maybe get a decent night’s sleep. But right now the plan for us is to tour, and tour, and then tour some more. We have our plates full.

LocalBozo.com: Is there anything else you’d like to leave for the readers of LocalBozo.com?

BA: Just check us out and let us know if you like our music.

LocalBozo.com: Fans, “Time and Pressure” the debut album from Devour the Day is out now. Catch the band on tour with Candlebox and Hinder. They’ll be stopping locally at New York City’s Irving Plaza on Thursday, September 26th and tickets are available now. We’ve been speaking with Devour the Day’s Blake Allison- thanks for the time today and best of luck on the road in 2013 my friend.

BA: Thank you- I appreciate it.