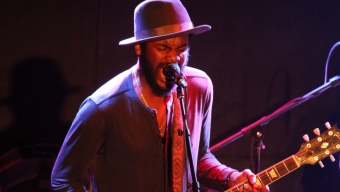 When a rain battered New York City was forced to cancel the final day of 2016â€™s Governorâ€™s Ball, artists understandably reacted in different ways. While some turned the City upside down in the middle of the night, others took a more traditional approach and scrambled to secure a new location to perform for their fans while in town. Tuesday eveningâ€™s show at The Bowery Ballroom may not have been planned far in advance, but the show quickly sold out once the announcement was made during the previous day and fans were treated to a live show that lasted more than two hours in duration led by guitar virtuoso Gary Clark Jr. and his talented three-piece band.

If this sounds at all familiar â€“ it should. It was roughly two weeks ago that Clark Jr. rocked a sold out Grand Ballroom at Webster Hall just before Memorial Day weekend. With Tuesday eveningâ€™s performance inside a far more intimate venue, Clark never took his foot off the pedal despite playing a far more intimate room. And fans predictably lost their shit once again, amid a set rife with mesmerizing musicianship and enough blues and soul to satiate even the most casual fans of either genre.

As much credit as Clark is often given as a guitar-player, he deserves nearly equal praise for his often outstanding vocals which capture more feeling than his finger plucking and facial expressions ever could. â€œBright Lightsâ€ has become a staple atop Clarkâ€™s set in recent months, and yet itâ€™s such an appropriate opener given the Manhattan setting that it would be difficult to envision the show starting any other way. While the spotlight never shone away from the charismatic fashionplate, the singerâ€™s backing musicians, to their credit, never missed a beat- laying down some particularly excellent rhythm sections behind Clarkâ€™s sometimes lengthy and sometimes lightning fast guitar breakdowns.

Continually touring behind 2015â€™s â€œThe Story of Sonny Boy Slim,â€ Clark would specifically shine on cuts like the falsetto-focused â€œCold Blooded,â€ a slow and steady R&B song that showcased his versatility as a singer. Other tracks like â€œShakeâ€ and â€œGrinderâ€ were purposefully delayed to a bit later in the set, once the crowd had been sufficiently loosened up by the likes of the foot-stomping â€œDonâ€™t Owe You a Thangâ€ and a downright awesome rendition of â€œWhen My Train Pulls In,â€ a defiant rock track that allowed Clark plenty of time to solo at will. The eyes of the crowd watched in awe as the fedora-clad frontman confidently strode across the stage, effectively dancing with his six string axe and leading his bandmates with conductor-like precision through a much welcomed and seemingly improvised blues-fueled jam.

Among the showâ€™s many memorable moments, the singer would begin his encore on stage by himself during a particularly stirring version of â€œThings Are Changin,â€™â€ which really seemed to captivate the assembly of fans on hand. Equally as impressive was Clarkâ€™s masterful playing on â€œChurchâ€ where he alternated between singing, strumming guitar and blowing into the harmonica affixed to his neck during the mellow but spirited number. The show quickly made clear that despite Gary Clark Jr.â€™s critically praised studio albums, they donâ€™t do the level of expertise and musicianship at his live shows sufficient justice. While the audio is often brilliant, itâ€™s the full sensory experience- watching him perform, interacting with the crowd of fans all around and actually hearing the music played in a live setting- that allows concertgoers to feel something different. And itâ€™s a feeling that fans of any musical genre should go out of their way to experience for themselves.