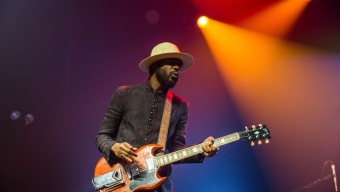 A completely SOULed out (sorry) Webster Hall welcomed the return of the unparalleled and infinitely versatile Gary Clark Jr.Â to New York City on Saturday night as the East Village venue would host one of the most talented guitar players of this generation, backed by his four-piece band. Bad puns aside, the show was in fact sold out – from the main floor to the balcony and surrounding bar area, concertgoers took up every square inch of free space available as the virtuosoâ€™s appearance on stage drew nearer. Despite the tight quarters, there was no shortage of clapping, swaying and rocking along with the infectious grooves traveling through the air courtesy of the finger picking rock machine and his ensemble. The genre transcendent rock star took Manhattan for a ninety-minute unrestrained ride rife with entrancing riffs and unrivaled licks that fans could not get enough off.

A rich and bold cobalt light emanated from the back of the stage and filled Webster Hall’s jam packed ballroom. The high and angled position of the lights provided enough contrast to silhouette Gary Clark Jr. as he nonchalantly strutted on stage armed with his six string and jammed on some blues bars allowing the rest of his bandmates the opportunity to get into position. Quickly, the three other members jumped in on the ephemeral jam which seamlessly led into the tonal beast and set opener â€œBright Lights,â€ a perfectly appropriate opener given the â€˜big cityâ€™ vibe that a Clark performance brings with it. Alternating between the song’s fat crunchy rhythm sections and distorted yet still silky smooth solos gave fans a preview into what the rest of the eveningâ€™s performance would unleash.

As â€œBright Lightsâ€ closed out, the house lights came on revealing the rather simple stage layout that included two mics and essentially just the musicians and their instruments. The frontmanâ€™s unassuming demeanor was evident in every facet of the relatively how hum show, almost as if Clark himself shoulder shrugs at his own talents. Emerging in dark jeans, a blazer, work boots and a fedora that shadowed over most of his face, Clark is very obviously the coolest guy in the room, evidenced by the very moment he launched into the uptempo hip-shaker â€œTravis County.â€ The backing band continued to hover around the doo wop/Motown vibe for a few songs with â€œOur Love,â€ â€œCold Bloodedâ€ and â€œBYOBâ€ from Clark’s latest â€œThe Story of Sonny Boy Slimâ€ released back in the fall.

Rhythm and soul went into overdrive mid-set with crowd favorites â€œAin’t Messin’ Roundâ€ and â€œDon’t Owe You A Thang,â€ a perfectly placed dynamic change that rallied the crowd into swinging and shaking. Southern rock and R&B manifested themselves pretty heavily in the back half of the set with tracks like â€œShakeâ€ and â€œDown to Ride,â€ sandwiching the fuzzy and muddled riffs of â€œNumbâ€ which emerged for a few minutes between the gentle sways and head nods of the softer songs. Capping another triumphant visit to Manhattan, set closer â€œChurchâ€ allowed Clark to truly showcase his full array of talents- both vocally and as an axeman. The 17 song set was a beautiful ride that managed to blend blues, country, southern, rock, funk, and a plethora of genres that no one else but Gary Clark Jr. could pull off so seemingly effortlessly.