The Darkness Lights Up New York City at Irving Plaza 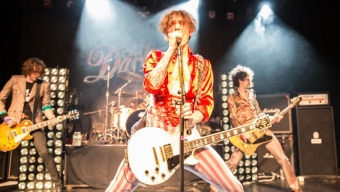 As their “Back to the USSA” tour began to wind its way down, United Kingdom glam rock quartet The Darkness took over Irving Plaza on Monday night in a show replete with anthemic choruses and spandex suits to boot. Touring in support of 2015’s “Last of Our Kind,” the rejuvenated band ripped through their full catalogue of albums over the course of a blistering sixteen song set that allowed the jam packed crowd a glimpse into the group’s blend of musician and showmanship. Lurking onto stage in the shadows with the house lights and stage’s four light towers going off, the four-piece band let the audience know they had arrived from the show’s opening moments.

Frontman Justin Hawkins would lead his bandmates through an inspired show opener with “Barbarian,” a track with a sonic opening riff that allowed the singer to showcase his inimitable high note vocals from the get go. Just seconds later, the flashing lights would unveil the now freshly populated stage which immediately plugged in the rest of the pieces you would expect to see at one of the band’s shows- namely, silk shirts, tight pants, Marshall stacks and a relentless supply of pelvic thrusts. The band’s undeniably fun and infectious energy instantaneously connected with the live crowd who could not help but throw their hands in the air and sing along as they became enraptured by “Growing on Me.” Hawkins to his credit managed to escalate the already immeasurable energy emanating inside the room by acrobatically, elegantly and effortlessly sauntered across every inch of the stage including drummer Rufus Taylor‘s, platform. As the evening progressed, the crowd would witness Hawkins’ gymnastic-like relationship with the drum platform on several occasions even catching him in a headstand performing splits right in the middle of a rock song.

Meanwhile, looking like he was plucked straight from the peak of the 1970′s, forced through a wormhole and put on stage in 2016, bassist (and recent LocalBozo.com interviewee) Frankie Poullain unleashed the group’s foundation of funk and groove while strutting across the stage in sunglasses and silk, literally topped off with a quintessential afro. The momentum seemed to alternate between the pageantry of the band’s charisma with the high voltage performance of hit after hit. The brunt of the set was comprised of a majority of tracks from the band’s major label debut “Permission to Land” (2003) including powerhouses “Black Shuck” and “Get Your Hands Off My Woman,” two highlights from the nearly 75 minute set.

Though fans surely marveled at watching Hawkins perform with such athleticism and endurance, watching the singer interact with his brother/lead guitarist Dan Hawkins showed off the group’s chemistry. The pair switched off between catchy verses and face melting solos during tracks like “One Way Ticket” and “Friday Night” to the delight of the standing room only crowd, who remained captivated by the band’s stage presence. As the show’s main set drew to its close, building to the iconic single “I Believe in a Thing Called Love,” the frontman demanded the crowd perform what he affectionately called the “Brooklyn Bounce.” As Irving Plaza’s show room sits on the second floor this definitely tested the venue’s foundation and overall structural integrity as the near sold out room bounced up and down in unison creating a rumble that rivaled the 4 train approaching the nearby 14th Street platform. The audience was eager for more as soon as the band headed backstage and mere minutes later it was clear The Darkness wasn’t done just yet. A powerful two song encore which consisted of “Concrete” and “Love on the Rocks With No Ice” was a perfectly suitable outro from the band to say goodbye to New York City, knowing that they’ll be back again before long.