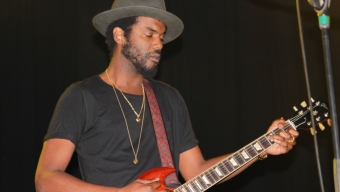 (You can read our recap from Gary Clark Jr.’s September 2014 show at Central Park here)

Wednesday evening marked the first of two sold out shows at Manhattan’s Terminal 5 and the return of blues guitar virtuoso Gary Clark Jr. back to New York City, touring in support of the release of September’s “The Story of Sonny Boy Slim.” In a jam packed set spanning seventeen songs, Clark Jr. and his bandmates perpetually wowed the standing room only crowd for two hours amid waves of lengthy breakdowns and tempo changes to appease fans of all styles. The local shows would sandwich a Thursday night appearance on NBC’s ‘Late Night with Seth Meyers,’ where the skilled guitarist would match equal parts style and substance for a live television audience, just as he would for a vocal sea of New York fans.

After recently wrapping an opening slot on the Foo Fighters’ ‘Sonic Highways’ world tour, Clark Jr.’s headlining jaunt takes him in and around the states through the spring of 2016- but the spotlight on Wednesday evening seemed to be the most comfortable spot for the deep voiced soulster. Tackling the stage in supreme confidence, the singer would follow his other bandmates out with little pageantry and in traditional rock and roll purity- no music, just the glimmer of stage lights barely covering the front few rows of the jam packed venue, but enough to give fans a glimpse at the man himself.

Donning all black, from his trademark hat to his plain t-shirt, Gary Clark Jr. would electrify the setting inside Terminal 5 from the show’s opening moments, serenading the room with perennial favorite “Bright Lights,” a more than fitting cut to re-indoctrinate himself to the New York faithful. The slowly building but catchy guitar riffs would tantalize the rabid crowd, before welcoming in the rest of his bandmates just before the song’s opening lyrics would unveil Clark Jr.’s outstanding voice- a precursor of things to come in the songs that followed. The upbeat “Ain’t Messin ‘Round” would follow before delving into an outstanding rendition of “When My Train Pulls In,” where fans have learned that a lengthy breakdown is not only commonplace, but a perpetual highlight night after night. It was more of the same here as fans continued to marvel at the guitarist’s seemingly effortless playing- making even the most raucous jams look fundamentally basic to anyone able to grip a guitar. Of course, that’s why we as concertgoers are often left awestruck, watching brilliance unfold before our eyes.

In all, the band would rip through seven cuts from the new album where “Grinder,” performed on Thursday’s aforementioned late night appearance and main set closer “The Healing” were particularly memorable highlights. Perhaps the most memorable moment though belonged to a fan from the audience, plucked straight from the crowd to perform lead guitar on “Numb” with the band as Clark Jr. would eschew the spotlight for nearly six captivating minutes. Focusing solely on the song’s traditionally blues-fueled vocals, the singer really shined here all while a long-time fan lived out his very dream in what was an infinitely fascinating moment.

The brief encore allowed fans a moment to catch their breath which would last through a solemn performance of “Please Come Home,” where Clark Jr. unleashed his high pitched vocals during one of the evening’s slower tracks. Closing cut “Next Door Neighbor Blues” though proved to be just the right balance of classic guitar work and smooth vocals to satiate any fan’s remaining hunger as the talented frontman capped out an otherwise excellent live performance in grand fashion. Tracks from his latest album add a bit more depth to a set that didn’t need much tinkering to begin with. That’s saying something considering that his latest release is only a sophomore effort on a major label (Warner Bros), and though it’s only been weeks since his new material has been dropped on us, it’s with great anticipation that we wait and see just where Gary Clark Jr. is set to take us next.