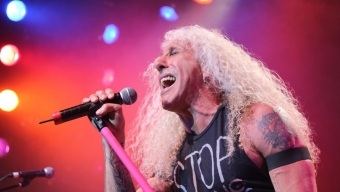 Long Island’s own Twisted Sister triumphantly returned to New York City on Friday night turning back the clock to the early 1980′s for a rowdy and rousing ninety minute performance. The pioneers of glam metal proved to be at the top of their game despite the fact that they’ve been at it collectively for more than three decades. Introduced by the evening’s emcee, stand-up comedian and host of VH1 Classic’s “That Metal Show” Don Jamieson, AC/DC’s “It’s a Long Way to the Top” fittingly played the five piece band out to center stage to the delight of the near frenzied audience.

Led by the frenetic energy of their frontman and catalyst, the band launched into opener “Stay Hungry” with singer Dee Snider racing toward the stage at the Best Buy Theater with particular vigor. Donning a sleeveless ‘Stop Taking Selfies’ t-shirt in trademark Snider fashion, the blonde curly haired vocalist could hardly contain his own energy, parading back and forth on stage as he gripped onto his signature hot pink mic stand.Â  To their credit, the rest of the band of aging rockers held up their end accordingly. Marc ‘The Animal’ Mendoza was his usual menacing self, aggressively pounding his bass guitar beneath his hulking frame. Eddie ‘Fingers’ Ojeda masterfully teamed with Jay Jay French to hold down the guitar work, impressively soloing at several points of the rocking performance. But it was hard to train your eyes away from Snider, whose distinct and gravelly voice holds up as classically you’d hope, likely a byproduct of the band’s heavily reduced touring schedule.

Though you can’t help but eagly anticipate some of the band’s iconic hit singles, tracks like “The Kids are Back,” “Shoot ‘Em Down” and “The Fire Still Burns” were each particularly rousing to the live audience who seemed to revel in anything that the band did on this night. Snider’s cover of The Rolling Stones’ “It’s Only Rock ‘n Roll” was also a particular highlight as the band put their own signature twist on the classic rock track- much like they have with a variety of holiday tunes during their “Twisted Christmas” shows each winter.

That said, to no surprise, the 80′s rock anthems “We’re Not Gonna Take It” and particularly “I Wanna Rock” rallied the crowd like no songs that preceded or followed them. Defiantly energy-fueled, Snider and his bandmates legitimately brought the house down as the entire standing room only crowd sang along to the familiar tunes in unison. Though the band hasn’t released a new album since 2006, Twisted Sister obliterated the notion that they’re solely a nostalgia act by doing what they do best- entertaining an audience. And in that regard, the band still has plenty left in the tank- especially for those of us that still ‘wanna rock.’