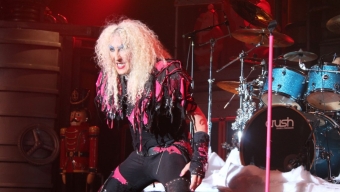 With the holidays approaching, the stage at the Best Buy Theater was transformed Saturday night into a wild version of Santa’s workshop at the North Pole. It was definitely not just another night in New York City as glam rock icons Twisted Sister would celebrate their quasi-annual “Twisted Christmas” extravaganza among a fervent sea of festive fans. The Long Island bred quintet looked right at home, surrounded by an elaborate stage setup equipped with the pageantry of an arena show in an all too intimate club setting.

Be it their anthemic songs which continue to reinvent the band or the festiveness of the Christmas season, the Theater was packed with enthusiastic fans seeking a rock music release of their holiday cheer. The show, a continuous celebration of Twisted’s 2006 holiday album, “A Twisted Christmas,” would mesh timeless holiday tunes infused with the band’s signature sound, with the throwback rock staples of their original music, corralled from playing together for over thirty years.

The velvety red curtains opened to a fog filled stage, with jittery elves in costumes working to amp the frenzied crowd, as each band member emerged for their first appearance. The loudest ovation was reserved for frontman Dee Snider, dressed in full makeup and full Santa suit, pulled out to center stage on a fire-laden sleigh by some of the most scantily clad ‘Little Helpers’ that you’ll see outside of a Rick’s Cabaret. His trademark curly blond hair was draped over his torn pink and black jumpsuit underneath, as he looked and sounded remarkably similar to the mid-eighties version of himself when Twisted Sister rose to its initial prominence.

Considering the band plays fewer than thirty shows a year these days, Twisted Sister looked and performed remarkably hungry, reveling in each moment they shared together on stage. Both fun and nostalgic, Snider and company strode out front and center, opening with “Have Yourself a Merry Little Christmas,” Twisted’s “The Kid’s Are Back” from 1983’s “You Can’t Stop Rock ‘n’ Roll” and a ramped up version of Irving Berlin’s “White Christmas.” Guitarist and founding member Jay Jay French dressed up for the occasion, donning a tuxedo, while growling bass player Mark “The Animal” Mendoza rocked a black, cheetah skinned vest and matching cuffs- both cheerfully paraded back and forth across the stage, around a gyrating Snider, whose gravelly voice screamed the familiar lyrics directly into his microphone, while clutching his hot pink mic stand.

Traditional Christmas favorites like “I Saw Mommy Kissing Santa Claus,” “Deck the Halls,” “Oh Come All Ye Faithful,” and “I’ll Be Home for Christmas” were merry rock takes on old fashioned standards. As the crowd sang along to Snider’s every utterance, two of the elves would return to opposite sides of the stage, shooting out a foamy snow which would blanket fans standing in the first few rows. The crowd was especially telling- many long time Twisted Sister fans- affectionately labeled “SMFs” or Sick Mother Fuckers, but also many teenagers as well, showing just how much the band’s music has transcended generations through the birth of new mediums. The band proved that a fun, energetic rock show is relatable to any age- proven by the crowd response to Twisted originals like “You Can’t Stop Rock ‘n’ Roll,” and “The Price.”

As the main set was winding down, Snider approached each member of the band, inquiring as to what gifts they’d be asking for from Santa for their ‘Heavy Metal Christmas.’ When the question was posed back to the outlandish vocalist, he smirked toward the crowd, who were collectively awaiting this very moment, before proclaiming “I Wanna Rock,” and the crowd exploded with emphatic rock pleasure as the main set concluded. The band’s absence was brief, however as Twisted launched into perhaps their most recognizable number, encoring with the iconic 1980s single “We’re Not Gonna Take It,” closing out the set and sending spirited fans back out to a chilly Times Square evening.

It is difficult to appropriately praise a show of this caliber- since much of it was such a seasonal pleasure and the rest of it was a reminiscent walk down rock music’s memory lane. By all accounts, Twisted Sister should have simply fallen into the realm of once outstanding but since forgotten, flash in the pan rock acts from the 1980s, like so many of their talented brethren. But judging by the success of this show, and the capabilities the entire band still possesses with the same enthusiasm that they exhibited in their prime, it is a shame that Twisted Sister doesn’t utilize the entire month of December by performing this show for fans in other cities. Their Christmas show if nothing else proved that fans of their early work are still around and will come out to support them, and that younger fans appreciate their music and want to see these older rockers parade around onstage. While new music may not be on the horizon, there remains a market, far wider than New York City, for keeping legendary songs and legendary personalities like those in Twisted Sister alive in perpetuity.