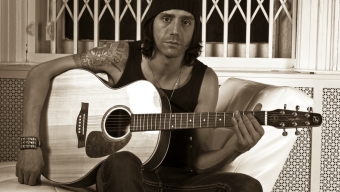 Last September, the band Tantric released their fifth studio record under that moniker though the term ‘band’ here seems to be open to interpretation. For roughly fourteen years, Tantric has been comprised of a flux of different musicians, stepping in and out of the picture with the frequency of folks coming in and out of an elevator. Any attachment to consistency with Tantric lies within singer Hugo Ferreira, who as the group’s songwriter, has remained the band’s focal point over the years with his distinctively baritone style.

Tantric formed in 1999 when the bandmates of the recently disbanded Days of the New agreed to work with Ferreira on a new venture. The band’s self-titled debut in 2001 spawned singles like “Breakdown” and “Astounded” which initially seemed to earmark the group for greatness. Problems within the group caused several lineup re-shufflings, leaving only Ferreira as Tantric’s original member.   This lynchpin would seem to embody the better part of the decade that followed for the band with the singer writing and recording much of the music himself and utilizing the hired hands of bandmates to join him on the road to perform under the Tantric name. Over the years the band’s sound has shifted greatly from record to record, a style that had proven beneficial with the release of 2008′s “The End Begins,” an album that featured the presence of the violin and spawned the single “Down and Out,” which re-established the band some.

Ferreira’s return with “37 Channels” features guest spots from former Hinder frontman Austin Winkler, former child star turned musician Leif Garrett and country music’s Shooter Jennings, but it’s the frontman’s honesty in his lyrics that really shine. Is it the group’s most successful release to date? Hardly. But the music industry has changed drastically over the past 15 years and Tantric loyalists can’t help but be thrilled at some of the stellar tracks on this record currently filling their ear buds.

With Tantric slated for a show on March 11th at New York City’s Studio at Webster Hall, LocalBozo.com was fortunate to grab a few minutes with Hugo Ferreira to preview what fans can expect. Listen in as we discuss the challenges on the four year path to putting out “37 Channels,” the revolving door of bandmates and the difficulty in retaining the band’s sound, performing here in New York City, working with such accomplished guest vocalists on the new album, the change in the music industry and so much more. And be sure to join LocalBozo.com and grab your tickets for the March 11th show in NYC right here.