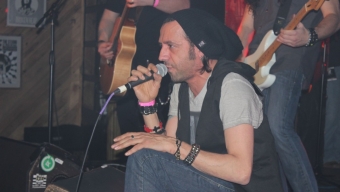 Concert Review: Tantric at The Studio

“A rock concert is one part music – which rocks – two parts audience and three parts heart.” It’s the kind of scripture that makes rock stars. Or perhaps it’s the kind of scripture that rock stars make. Nevertheless, the sentiment was well received by the small but vociferous crowd on Tuesday night inside the pint-sized space at The Studio at Webster Hall, gathered together to welcome the quote’s author Hugo Ferreira and the most recent incarnation of his band Tantric, an outfit that has jumbled more lineup changes than KISS over their fifteen years.

2013 saw Ferreira release “37 Channels,” their fifth full length release under the Tantric moniker and one that saw the frontman parse more than 120 of his own written songs down to just thirteen, with guest spots from the likes of Shooter Jennings, Leif Garrett and former Hinder singer Austin Winkler. With a dearth of present day music outlets that support the hard rock genre, the band is clearly struggling to find their audience which is a shame considering the level of the group’s dynamic performance on this night – certain to be corroborated by any of the fans in the house on Tuesday. Tantric’s 90 minute set featured each of the band’s singles over the years and also touched upon some of their newer tracks that worked entirely well in this setting.

Vocalist Hugo Ferreira‘s energetic arrival to the stage in his black skullcap and black vest showcased a singer far younger than his forty years might intimate, owning every pair of eyeballs in the room with a veteran stage presence and an even better sounding voice. His raspy, baritone vocals hold up as well today as they did in 2000, when the recently disbanded Seattle rockers in Days of the New started up a new project called Tantric with a then unknown singer. While it’s clear that Ferreira calls all the shots- he writes every note of the band’s music and then uses musicians as hired hands to work alongside him- it’s refreshing to note that rather than be tethered to his previous hits against his will, the frontman seems to embrace them and with each new iteration of Tantric, seems to breath some new life into his own catchy songs.

Tracks like “Hey Now,” “Astounded” and “Mind Control” were especially energetic and at times Ferreira would pop a squat right on stage directly in front of his frenzy of fans singing along. That is until the band’s highest charting single “Breakdown,” during which fans were actually welcomed up on stage to sing backing vocals alongside Tantric. The rebellious “Mosquita” and the fast paced “Fall Down” followed suit and despite some technical glitches with the keyboard portion of “Mourning,” the band’s selection of 2008′s “Down and Out” was a no-brainer to close the show. Though some bands more than a decade and a half into their career have established a far more loyal following, Tantric is one of the few that remains grossly unheralded. But that doesn’t seem to bother Hugo Ferreira, Tantric’s singer/songwriter and leader, a frontman who seems utterly content in continuing to create his own form of music and remain uncompromised by obstacles.