The “Cheeseburger” at Paul’s Da Burger Joint: Worth the Hype? 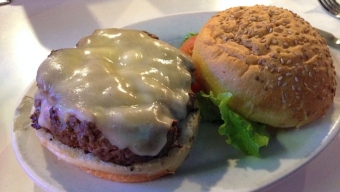 In our new series of posts called “Worth the Hype?” we’ll trek across the different boroughs, tasting the staples of the New York food and beverage scene and evaluate whether or not they are worth going out of your way to check out for yourself. Let our “Worth the Hype” series be the discerning palate you only wish you had.

There is a neon sign that hangs in the window of Paul’s Da Burger Joint that reads ‘NYC’s Best Burger.’ It’s only fitting then that we take some time to dissect that statement and send in the ‘Worth the Hype’ team to analyze whether or not that is truly the case. Any passersby of Second Avenue in the East Village have certainly come across Paul’s, a neighborhood staple since 1989. It’s bright red awning and consistent foot traffic have made it one of Manhattan’s most sought after hamburgers for more than two decades.

Inside, Paul’s is a throwback style New York City burger spot that doesn’t exist anymore. There isn’t any minimalist decor here, no modernized barn wood along the walls or ceilings, and certainly no inventive cocktail program concocted by a renowned mixologist- all of which seems to be popping up inside every new fangled burger place. Not at Paul’s though, where much of the charm emerges from its relaxed setting, despite the flurry of grill cooks and waitresses buzzing around you and a cluttered array of knick-knacks and old world tchotchkes on every piece of wall space.

While there are a few tables inside of the relatively small dining area, you’d best be served to grab a seat at the counter where you can watch the cooks prepping each burger to order. They plop each blend of mashed meat onto the grill and cover them with silver domes to ensure proper cooking throughout each patty. Working inside such small quarters with the constant smell of wafting burgers is clearly no easy task, evidenced by a sometimes abrasive work staff that would prefer to be left alone but despite the absence of pleasantries, Paul’s provides some unbeatable values with their reasonably priced burgers.

Whether you like ‘em traditional or experimental, there’s no shortage of toppings at Paul’s, which offers the likes of fried eggs, jalapenos and chili con carne as alternatives as well as a “Beef Burger Tartare” served cold with a raw egg and capers. The house specialty here is the “Eastsider Burger” ($10.95) which boasts a bacon cheeseburger loaded with ham, onions, mushrooms, and tomatoes but to truly distinguish Paul’s place on the burger chain though, we opted for their “Monterey Jack Cheeseburger“- your basic melted cheese on patty, sandwiched by their seeded bun. And priced at just $6.60, Paul’s is a place that openly recognizes that you shouldn’t have to break the bank for a slice of Americana.

At eight ounces, the sizable cheeseburger fit neatly on the bottom bun, with the gooey melted cheese clinging to the juicy patty accordingly. A dollop of ketchup and with fresh tomato and lettuce as accoutrement, we quickly dive in with our first bite. Paul’s burgers are first and foremost prepared to perfection, as pink a center to a medium rare as you’d expect to see from such grilling experts. There was a considerable amount of grease that dripped from the now sopping bottom bun onto our plate, but that’s hardly an issue when enjoying a burger- it is a burger after all. Although the burger was rather bulbous, the patty was hardly seasoned which both positively and negatively impacts its flavor in that it doesn’t necessarily allow Paul’s to deliver a burger that stands out, but overall, the sandwich was the type of traditional style hamburger that harkened back to the first time you tasted a pure hamburger and reminds you why you loved them so much in the first place.

Value: Of the twenty burgers that appear on Paul’s menu, all of one- their house specialty “Eastsider Burger”- exceeds $10. For two people to enjoy two of New York City’s most raved about burgers and a side of fries for under $20 is unheard of today.

Size: At eight ounces, the burger managed to look and feel larger than it was. The patty was thick, juicy and perfectly cooked and was delightfully misshapen without being a perfectly sculpted round meat circle.

Taste: Unfortunately, the taste of a Paul’s burger has been subject to much criticism though most is far harsher than the burger deserves. Many have argued that there are problems with the burger’s flavor when void of toppings and condiments, a sentiment that is largely untrue. The patty itself does taste under seasoned but on its surface, a Paul’s burger is a basic tried and true hamburger- the way it’s supposed to taste without any bells and whistles.

Overall: Seemingly every new restaurant- from high end French brasseries to craft beer bars- wants to enter the conversation with a new entry for New York City’s best burger. While their shapes and sizes and condiments almost always differ, at the end of the day it’s a difficult dish to serve improperly. At Paul’s Da Burger Joint, you’ll get exactly what you expect- a solid burger prepared to your liking in its most old fashioned sense. Is it New York City’s finest? Probably not. But at under $7, you won’t find a better value anywhere in town. And the satisfying aroma from the burger grill will surely linger on your clothes long after you’ve left the casual haunt.

Other ‘Worth the Hype’ Pieces:

The “Luger Burger” at Peter Luger Steak House: Worth the Hype

Mighty Quinn’s Barbeque: Worth the Hype

The “Ramen” at Ivan Ramen Slurp Shop: Worth the Hype

The “Ramen Burger” at Ramen.co: Worth the Hype

The “Classic Hot Dog” at Nathan’s Famous: Worth the Hype