Mighty Quinn’s Barbeque: Worth the Hype? 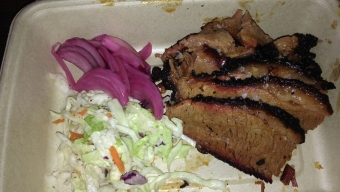 In our new series of posts called “Worth the Hype?” we’ll trek across the different boroughs, tasting the staples of the New York food and beverage scene and evaluate whether or not they are worth going out of your way to check out for yourself. Let our “Worth the Hype” series be the discerning palate you only wish you had.

The absence of reservations here has been a noted issue at times. In fact our first visit was marred by an extended wait and a miscommunication with the hostess during our initial attempt. Not to be deterred, we returned for a late weekday lunch which was ideal despite only one table being available even at that time of day. As has become standard at most ‘cue joints, Mighty Quinn’s Barbeque mandates counter side ordering so that you can get a good look at what meats you’ll be tasting as you watch as they are sliced in front of you. The interior is mostly nondescript. You won’t find any knick-knacks up on the wall or much of anything at all in fact. You might even mistake the place for a newfangled craft beer bar of sorts. Down near the restrooms, piles and piles of wooden logs are the only bit of distinction inside of an otherwise bland decor. White walls, wooden tables and ceilings and that’s about it. But importantly, the design allows you to afford all of your attention where it belongs – to the ‘cue.

While the massive “Brontosaurus Rib” is by far the priciest menu item at $23, the remaining fare here offers fantastic values at less than $9 per single serving, and coupled with an additional small side, that should be more than enough to satisfy the meat eater inside of you. “Rib” aside, there are six other meats from which to choose including “Wings” and “Half Chicken,” “Smoked Sausage” and “Pulled Pork” to meet the needs of any ‘cue fan.

Mighty Quinn’s bread and butter however is with their “Brisket,” ($8.85) which they’ll tell you all about at the counter. And if you hesitate for even a moment, you’re making a poor decision. Shame on you.  Opting for the dish naked (without a sandwich), we are served 7 slices of the mouthwatering meat- a rainbow of colors from the black marbled exterior to the pink outer layer to the tender brown middle- surrounded by pickled red onions and creamy slaw. If you’re particularly fortunate (or if you ask), you’ll have the opportunity to taste the ends which are incredibly rich, smoked and fatty. And they’re so delicious, you’ll need to sit down to enjoy them. Seasoned with a thick sea salt and a peppery rub, each morsel is outstanding on its own, but the table side bottle of their slow smoked barbeque provides some much welcomed tang to the already savory meat. Our only bone (pardon the pun) of contention is that we could have used a few more slices to consume.

The bulbous “Spare Ribs” ($8.50) meanwhile more than made up for any brief mourning at our now empty brisket plate. The half rack was piled high with thick meaty hunks of red and pink pork with an absolutely delicious rub that was so mouthwatering that sauce proved unnecessary. Generously portioned, the tender meat easily stripped off of the bone, pairing brilliantly with the side of vinegar slaw and pickled cucumbers. Moreover, the side order of “Burnt End Baked Beans” ($3, small) which were creamy and sweet, proved to be an excellent compliment to the array of meats that briefly sat in front of us. That is, until we reduced them to just a plate of empty bones.

Value: Topping out at under $9 for six of the seven meaty offerings, guests can easily enjoy a full meal with a side and a beer for under $20. And if you’ve been to rival joints, that’s an uncommon occurrence

Size: Portion size varies a bit for single servings- the “Spare Ribs” were more than sufficient but we longed for extra slices of “Brisket.” But with a side dish, the pairing should be enough to satiate you.

Taste: What else is there to say about the rich marbled fatty burnt end of their brisket? The trimmed pieces were unbelievably decadent and similar to the succulent pork ribs were tasty enough even without the restaurant’s tangy barbeque sauce on the table.

Overall: There’s a growing competition in the New York City barbeque scene from newcomers like BrisketTown to staples like Fette Sau, Dinosaur Bar-B-Que and Hill Country. But truthfully no newly opened ‘cue joint has made more of a splash than Mighty Quinn’s, routinely named in any conversation of the City’s finest. It’s an overused cliche, but the brisket does in fact melt in your mouth. And if you can secure a table during their off-peak hours or without waiting for too long, prepare yourself for one of Manhattan’s best barbeque spots. Just don’t forget your wetnap. Worth the hype? An undeniable yes and a nod to perhaps the best barbeque in our fare city.

Other ‘Worth the Hype’ Pieces:

The “Luger Burger” at Peter Luger Steak House: Worth the Hype

The “Ramen” at Ivan Ramen Slurp Shop: Worth the Hype

The “Ramen Burger” at Ramen.co: Worth the Hype

The “Classic Hot Dog” at Nathan’s Famous: Worth the Hype