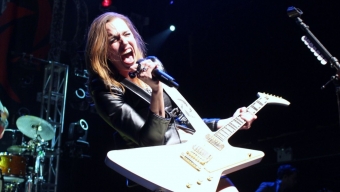 Even at 75%, Halestorm frontwoman Lzzy Hale is better than most singers operating at full capacity. Battling the lingering effects of a cold, the singer and her bandmates headlined a damn near close to sold out show at Terminal 5 on Friday night proving that despite any malady she brings no excuses to an utterly flawless rock show that showcased a band more polished than their years of experience might imply. The group’s twenty song set focused on their two studio releases with some covers from their recently released 6 song “ReAnimate 2.0” EP thrown in for good measure.

Shortly after 10pm, the house lights lowered to welcome Halestorm drummer, Lzzy’s younger brother, and more importantly, recent LocalBozo.com interviewee Arejay Hale out to the stage first to instigate an already riled up crowd- dressed in full Nutcracker regalia. We initially dubbed Arejay the group’s energetic catalyst, a trait that was on full display throughout the band’s roughly ninety minute performance, as his elevated drumkit became the focal point of much of the show. His constantly moving drum smashes and his relentless showmanship left us wondering how he managed to harness such energy as the performance progressed.

His mates soon followed him out to stage with only the sound of screaming fans to welcome them front and center. Lzzy to her credit showed no effects of illness as the band launched immediately into their 2013 Grammy Award winning single “Love Bites (So Do I),” “Mz. Hyde,” and “It’s Not You,” which were all particularly inspired. Calling the fans “one big happy dysfunctional crazy family,” in an endearing way, Halestorm seemed particularly inspired on this night- cohesive in their performance and all smiles for the New York City crowd. For a group that has mastered a fine line between heavy metal infused with elements of pop, they have carefully concocted a formula for writing music that suits their skill set perfectly- crunching guitar riffs, catchy singalong choruses, and an unparalleled stage presence that mashes together rock music and sex appeal seamlessly.

As the show progressed, the frontwoman’s attire was continually reduced until she remained in a black leather tube top and black leather shorts toward the end of the show. But while Lzzy remained the show’s most prominent figure, it’s the band’s music that remains most captivating. Tracks like “Daughters of Darkness” and “Rock Show” were particularly rocking- no surprise considering they contain some of the group’s most rousing choruses. The show was mostly fast paced, save for a stirring performance of “Break In,” which featured Lzzy at the keys. Covers like Judas Priest’s “Dissident Aggressor” and a fun version of Daft Punk’s “Get Lucky” brilliantly followed Arejay’s lengthy drum solo before the band closed out the main set with single “I Get Off,” a track that brought all of the audience’s female voices to the forefront of the tri-level venue.

The group closed out their set with an energy fueled “I Miss The Misery,” which seemingly had the entire standing room only floor screaming along with Lzzy before the slower “Here’s To Us” closed out the show. Just as many band’s seem to be moving toward smaller and smaller venues, Halestorm certainly still seems to be ascending with this headlining run being staged in the biggest rooms that the band has ever played on their own. With two more weeks of touring ahead of them, the singer promised upcoming work on their third full length studio album early in 2014- which gives fans something to look very much forward to, but also means that we won’t get to see the uber-talented Halestorm back in our area for some time. But if this show was any indication, we’re more than willing to wait.