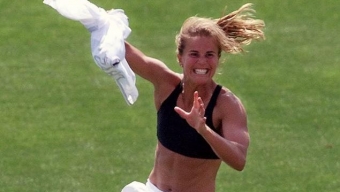 Almost a decade and a half has passed since 1999- a time where the turn of the century terrified us, our iconic twin towers were still proudly casting shadows over downtown Manhattan, and a collection of young athletic women were blazing a trail as role models during an unforgettable run toward the World Cup. More than 40 million television viewers and 90,000 fans in person had their eyes set upon the Rose Bowl on July 10th, 1999 as the United States women’s soccer team had turned heads in an unparalleled run to the finals against the mighty team from China. Featuring never before seen footage, ESPN culled hours of behind the scenes video shot inside the team’s locker room and their travels around the country and wound up with “The ‘99ers,” an hour long piece documenting the team’s rise to greatness and a retrospective featuring eight of the principals involved.

Airing Tuesday, August 20th, the film is narrated by team captain Julie Foudy, who eagerly and excitedly parades around the team with a handheld camera, capturing the enthusiasm and the genuine anticipation of the young women set to make history. The latest in ESPN’s “Nine for IX” series, the program brings much of the team back to mid-field at the Rose Bowl, this time in 2013, and allows them to reflect upon their iconic championship run from 1999. We watch as the United States overcomes a 2-1 deficit at halftime to defeat Germany, makes quick work of a strong Brazil team 2-0, and culminates in a 0-0 tie with China in the Final, resulting in the familiar imagery of rivaling penalty kicks. Even though we know the outcome, the documentary manages to be as captivating as ever, watching each United States kick sail into the goal time after time.

Of course, the lasting visual of defender/midfielder Brandi Chastain ripping off her jersey in the epitome of victory, on her knees solely in her sports bra plays a huge role in the story’s conclusion. But the lasting effects of the piece prove that the 1999 team was more than just Chastain’s spontaneity, or the emergence of Mia Hamm. It was about the collective, about the team- about a group of girls getting to both live out their dreams, mesmerize an entire country around their sport, and inspire female athletes that would look to them and follow suit.

LocalBozo.com was fortunate to grab a few minutes with “The ‘99ers” producer and narrator Julie Foudy and teammate Brandi Chastain. Listen in as we reflect upon the 1999 World Cup team, whether the group of girls keeps in touch, the fateful jersey removal during the team’s victorious Cup win, and so much more. “The ‘99ers” airs on ESPN on Tuesday, August 20th as part of the ‘Nine for IX” series at 8pm ET.