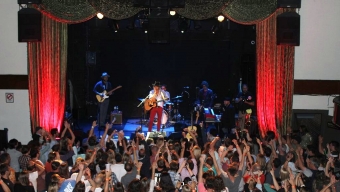 A sold out night at the Bowery Ballroom Thursday night was packed with a room filled with mellowed out rock fans, set to welcome Hawaii’s surfer-turned musican Donavon Frankenreiter on a rainy New York City evening. Despite a moniker that fails to roll off the tongue, the mustached frontman led his bandmates on stage and a sea of his loyal and local fans through a ninety minute set comprising elements of rock, folk, and an influx of blues during the enigmatic singer’s captivating performance.

Any research on Frankenreiter will tell you that the artist is a long time friend of melodic crooner Jack Johnson. But the sentiment does a bit of a disservice to Frankenreiter himself, who deserves his own share of the spotlight. Pleasantly, his live show rocks much harder than the more relaxed guitar and banjo strums on his studio albums would indicate, evidenced by the constantly moving and passionate crowd as the Sanuk Summer Tour kicked off on this night. And perhaps best of all, he’s all about affording other artists an opportunity by giving bands the chance to win an opening slot at each stop on the tour, alongside support from two-piece throwback outfit Mia Dyson. Long before he would take centerstage, Frankenreiter could be found outside the venues doors, posing for pictures and chatting up some of his amped up fans.

The show’s late 10:45pm start was fitting in that the audience had plenty of time to do some pre-show drinking at each of the Ballroom’s three separate bars in the multi-level space. Donning a black fedora and skinny red pants, Frankenreiter casually strutted on stage just after the lights went down opening with an outstanding trio of “Same Lullaby,” “What’cha Know About,” and the folksy “Heading Home.” Leading his four piece band, the group alternated between acoustic and electric numbers, throwing in a saxophone, banjo, and harmonica solo along the way for good measure. Musically, Frankenreiter’s brand of feel good songs bring a smile to your face almost immediately with an easygoing simplicity that makes so much of his music easy to resonate with. Despite a majority of his catalog revolving around a laid back and tranquil feel, several times throughout the show Frankenreiter’s skills as a guitar player were utterly eye opening, resulting from solos that would make even the most ardent rock fan proud.

With much of the crowd sporting fake mustaches in support of the singer’s facial hair, Donavon Frankenreiter took them on a musical journey, with sounds reminiscent of sitting comfortably on a sunny beach, drinking a daiquiri, and listening to some soothing guitar strums- much like we’d envision the artist’s life to be when off the road. While tracks like “West Coast Fool” and “Lovely Day” paced the 17 song set, the familiar “Free” was a particularly rousing tune with his loyal fans singing along in unison. But the evening’s most inspired moment brought three lucky fans on stage with the frontman for “It Don’t Matter,” leading a hushed crowd through the song’s catchy as all get out chorus, a cappella style. Watching Frankenreiter, he seemed to be having as much fun watching his fans sing his signature tune as they were to be up there singing them. In actuality though, it was those of us that had the opportunity to watch him perform on this night that truly had the best time of all.