ESPN’s Mike Greenberg Interview with LocalBozo.com- “All You Could Ask For” 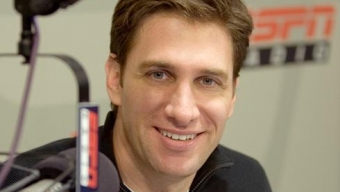 Mike Greenberg is no stranger to putting his thoughts to paper. Despite a wildly successful career with ESPN as a Sportscenter anchor and co-host of the “Mike and Mike in the Morning” radio show, Greeny as he’s affectionately known cut his chops as a Chicago sports journalist during the early portion of his budding career. With his semi-autobiographical ode to sports fans already penned in 2007′s “My Wife Thinks I’m An Idiot,” Greenberg has, for the first time in his career, turned to fiction with the release of the sometimes funny but mostly heartfelt, “All You Could Ask For.” (Harper Collins)

The story follows the lives of three women, each of differing ages and backgrounds, who despite being relative unknowns to each other, are about to be brought together in a way that none of them would have ever imagined. A sportswriter/talk show host, writing a fictional story about three women? It sounds far-fetched certainly, but Greenberg’s writing style reads authentically even though it hardly sounds like the talking head we are so used to hearing. Although sports fans might have some apprehension about being tasked with getting through such a premise, the story is an easy read- each character picks up seemingly where the other left off to keep the story moving fluidly- and with each page turn you begin to piece together where the author’s focus is headed.

While the early portion of the story is relatively light-hearted, the book’s central focus was inspired by Greenberg’s own family friend Heidi Armitage, who unfairly and rapidly lost her life shortly after being diagnosed with cancer. Her story was of such inspiration to Greenberg that all proceeds that he is slated to earn from “All You Could Ask For” are being redirected to The V Fund, a non-profit organization that focuses on cancer research, started in memory of former NC State basketball coach Jim Valvano, one of the most influential figures in sports history. At the very least, each copy purchased of “All You Could Ask For” is going to a good cause, should for some reason you not enjoy the book. But you almost certainly will. The fleshed out characters, the dynamic between them, and Greenberg’s ability to hone into the female psyche make the book a truly fascinating read cover to cover for men and women alike.

With the book tour now underway, LocalBozo.com was fortunate enough to sit down with ESPN’s Mike Greenberg for an exclusive interview. Listen in as we discuss how “All You Could Ask For” came to fruition, it’s potential to be developed into a screenplay, channeling the female voice so accurately, and whether he had any trepidation about including anything too risque in his story. And don’t think we don’t touch on the New York sports scene either as we put Greeny on the spot about the Knicks, the Jets, and what to do about the Darrelle Revis contract stalemate. As usual, Greeny was interesting, funny, insightful, and spot on- and we’d expect nothing less from sports’ most exciting morning man, and potentially its most accomplished author.

“All You Could Ask For,” the first fiction work from ESPN’s Mike Greenberg is released today, April 2nd by Harper Collins Publishing.