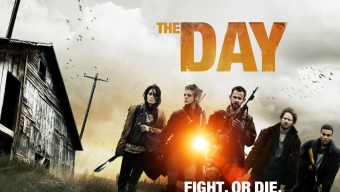 The post-apocalyptic thriller genre in film is not necessarily a novel concept. Yet time and again with the release of a new film paying homage to a similar sort of premise, it remains to be frighteningly intriguing each time. Enter “The Day” (R), a brand new movie in this popular trope of grind house filmmaking. The film is a savagely brutal, in your face character study, packed to the gills with much of the pending end of the world set pieces that attracts us to movies in the first place. However below that surface lies a deeper story that makes “The Day” a terrific film and a breath of fresh air for the genre.

“The Day” stars Dominic Monaghan (Lord of the Rings, Lost) as Rick, the leader of a gang of survivors left from an apparent end of days. As the film opens we see Rick followed by the rest of the group played by Shawn Ashmore, Ashley Bell, Cory Hardrict, and Shannyn Sossamon- five survivors trekking through a barren hell-scape looking for any kind of shelter and food to sustain them. The incredibly dark and depressed demeanor of the group and their dire surroundings sets an immediate tone of uncertainty, which is a pervasive factor throughout the entire film.

Once the characters arrive at their much needed place of shelter, the film takes an even darker and more confining tone. The shelter comes in the form of a mysterious house which foreshadows some horrific circumstances of things to come both inside and outside of its walls. The minimal set pieces that exist within the bulk of the film easily pay tribute to the classic horror film, “Night of the Living Dead” and crime-thriller, “Assault on Precinct 13.” Both of these highly notable works used one location to tell the tale of terrifying external forces trying to get inside to cause harm. “The Day” perfectly captures this tension, while at the same time elevating it with excellent acting, great modern film making techniques, and surprises. And speaking of surprises, this film has a ton of them. Repeatedly, you know something is coming but you don’t know when. The director and writers have perfectly choreographed these jarring and often very gory events to maximize the audience’s shock level.

Any fan of the gore and horror genre will feel right at home with “The Day.” From start to finish you can tell how much the film’s creators prefer a more traditional hard R rating, choosing to not hold anything back. Although it is worth mentioning that at the same time, the violence and bloodshed do not at all dilute the narrative. These graphic scenes only help to enhance a very bleak yet uplifting snap shot of the human spirit at work. Since we are running this piece as “The Day” is released, we are happy to celebrate it with an in depth audio and transcribed interview with Dominic Monaghan who both starred in and produced the film. Listen in as the “Lost” and “Lord of the Rings” actor discusses the process of creating the film, its tone and style, relating his previous career works to this new film, and what exciting projects he has coming up in the near future.

“The Day” starring Dominic Monaghan, Shawn Ashmore, Ashley Bell, Cory Hardrict, and Shannyn Sossamon is rated R, has a runtime of  90 minutes and is released on Wednesday, August 29th.

LocalBozo.com:  LocalBozo.com is happy to have with us Dominic Monahan of the new film- “The Day,” coming out on August 29th from Anchor Bay and WWE Studios. Dominic how’s it going?

Dominic Monahan: Hey, everything is going great! I’m driving around in crazy, balmy weather in Los Angeles. I’m from England so I’m not used to anything that gets above eight-five degrees. So, I’m just trying to hide underneath my A/C all day.

LocalBozo.com:  Well, try to keep those windows closed because it’s very smoggy and who knows what going on in L.A. these days.

DM: I love L.A. It’s a fantastic city. I’ve been living here for almost ten years now. But I have to say I’m fiercely allergic to the air. You know I get really bad hay fever and sinus problems like that. So that’s one of the few bummers about L.A.  But it’s a great place to live.

LocalBozo.com:  Your new film, “The Day” has that fantastic post-apocalyptic feel which I love in this type of movie. Can you tell me what drew you to the film?

DM: I tend to do things based on material. And the material in this script was really strong. It was a great role they wanted me to play the leader of the gang. It was all about the script for me and the way they sold me on the character.

LocalBozo.com: “The Day” is unquestionably a hard R edge to it that so many films of today lack by going PG-13 and holding back.  If you could, please speak about that, and also talk about some films you loved from your childhood that compared to it.

DM: I don’t strictly chase after anything in particular apart for good material. So, it (The Day) happens to fall on the side of having a hard R rating and it doesn’t pull any punches you know. It’s certainly something that comes with a bit of a warning, but it’s not necessarily the type of material that as an actor I run around to get but it was the strength of the material. In terms of films that we were influenced by- it would have to be films like, “The Road.” Viggo Mortensen, who is a friend of mine just did a stellar performance in that. The world was very bleak. And you know a lot of these post-apocalyptic films had influence in that project. There are also elements, and it’s not as fantastic as, “The Matrix,” but the Matrix is a post-apocalyptic film. We really like the idea that no one really knows what has happened. These guys are on the ground dealing with it. That’s sort of the same in “The Matrix” to a certain extent. They don’t know how it got to this point but, they are trying to stay alive throughout.

LocalBozo.com: “The Day” has a real minimal look to it. And this shouldn’t be seen as a spoiler to anyone but, most of the scenes take place in one location, one house. And I feel that it has a real “Night of the Living Dead” element to it. Can you speak to that?

DM: Yes, there is some “Night of the Living Dead” stuff for sure. I think we were paying homage to that in some of the scenes where all you can see is silhouettes of people coming towards the house in a very siege mentality.  It was definitely one of the films we drew from. And some of the classic Hammer Horror films were also homaged in there as well. There’s the low lying fog, and some of these characters who come out of nowhere and shock you and scare you. We had a few scary children there as well. There was also an influence from “The Omen” and stuff like “Don’t Look Now,” which was an old Donald Sutherland, Julie Christie film which I really like. I think that good writers steal from other good writers, and that’s kind of known throughout history. That’s not say the script is not original, but it is certainly influenced by some of the higher quality horror-thrillers out there.

LocalBozo.com:  Dominic, you have a rich history on television as a cast member on “Lost” and on the big screen in the “Lord of the Rings” trilogy. In these roles you were also in life in peril situations. Please speak about any of your personal input that you added to “The Day.”

DM: I was lucky enough to be one of the producers on this film. So, I was hopefully helpful in working out how this film was going to get shot in a very small amount of time- what actors need in that regard, and how to move things along as best as I can. I mean, I’ve been really lucky that a lot of the projects I have been in deal with life and death where people are in extraordinary circumstances. The experience of that which is great. I think what’s helpful there is to try and keep it as level headed as possible. When ordinary people are in extraordinary situations, they don’t suddenly put on a cape and fly around. They remain human. Now, I was quite turned on by the idea that they are just normal people; they are just trying to stay alive. They are trying to get through life where the stakes are high. And I always attempt to make my performances as grounded as possible. It’s almost like, what would the audience do in that situation? The audience responds well to a hero type character that’s just like them.

LocalBozo.com: That’s totally right. All of the characters are grounded and seem like they could live in our modern world. But at the same time, moviegoers get that horror movie feel, of course gore-hounds get alot of what they want. And you get the action and suspense and it really rolls into one movie that many people can enjoy, so I thank you for that sir.

DM: My favorite thing about the film that it’s made very clear, very quickly that this is a film where anything can happen. We will kill people in surprising way. We will have a hero become a villain. We will have a villain become a hero. Nobody’s safe here and I love that about these films because the audience very quickly realizes that they can’t hang on to anything, they are going to have to let go.

LocalBozo.com: The WWE was one of the backers of this film. Can you please tell me what their on set input was, if any?

DM: We actually made the film as a strict independent with Gold Circle Films. And then we showed it in Toronto and Michael Luisi, the head of WWE Films just fell in love with the project and thought that it was perfect for the fan base of WWE. And I think that was very shrewd, because the fan base of WWE is basically young enthusiastic men and ladies as well. The fan base likes these sorts of thriller, horror, and siege movies. The film was made independently, but when WWE bought it they really marketed it well for an audience that is going to lap this up.

LocalBozo.com: Dominic, what are some upcoming projects you would like to inform the readers of LocalBozo.com about?

DM: I just finished creating this show called “Wild Things” which is my attempt to have people think a little differently about animals that most humans are scared of- snakes, spiders, scorpions, and bees. I go around the world trying to change people’s minds. And that’s something I am real excited about. That’s something that you can get more information about at my Twitter page, @DomsWildThings. That will come out in the early part of next year.

LocalBozo.com: “The Day” comes out on August 29th and I expect all fans of horror, action, survival, end of the world and dramas to go out and see it! Again, thank you Dominic Monaghan for joining us here at LocalBozo.com.