Everything Else Interviews — 20 January 2012 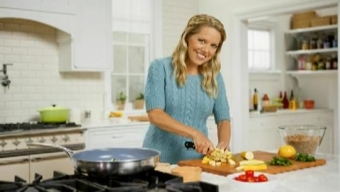 The relatively mild winter we’ve had thus far certainly didn’t seem to prevent us from packing on the traditional holiday pounds. And how could they? Only working out like a madman could help us shake off the calories from the stuffing, potato, and cake parties we indulged in. But with 2012 just upon us, there’s still plenty of time for you to get back on track and adhere to your resolutions as we begin the new year.

Enter Food Network personality and Cooking Channel host Melissa d’Arabian, who this week premieres her new series, “Drop 5 Lbs with Good Housekeeping.” Adapted from the magazine, the ten episode series (premiering January 21st) utilizes every necessary fundamental to bring about easy lifestyle changes affecting weight loss, with a step by step guide for you to personally get involved. d’Arabian will be cooking up some tasty, healthy recipes, teaching some fat blasting fitness workouts, consulting with her on site nutritionists, and sharing her tips on dining out, portion control, snacking, effective food shopping, and keeping it all in perspective. Each of the series’ ten episodes has different themes, all of which are sure to be engaging and informative, and if followed, will surely have a beneficial impact on your waistline.

Host Melissa d’Arabian is no stranger to the small screen. The fifth season winner of “The Next Food Network Star” and host of “Ten Dollar Dinners” on the same channel, now makes her Cooking Channel debut with the new series. The mother of four, d’Arabian specializes in cooking healthy, but also on a budget, and effectively meshes her bubbling, enthusiastic personality with her specialized culinary skills. As such, d’Arabian is an ideal host for “Drop 5 Lbs. with Good Housekeeping,” and an ideal guest for an interview segment.

LocalBozo.com’s Registered Dietitian, Leslie Goldstein was fortunate enough to sit down with Cooking Channel’s Melissa d’Arabian, just days before her new series is slated to premiere. Listen in as we discuss everything from dining out in New York City, feeding families with picky eaters, how to prepare a nutritious meal for The Big Game, to which foods she considers ‘superfoods.’ She also gives us some hints as to what we can expect from “Drop 5 Lbs with Good Housekeeping” and what she hopes that viewers can take from the new show.

For more information about Melissa d’Arabian, you can follow her on Twitter @melissadarabian and read up on her whereabouts here. And check back at the beginning of every month on LocalBozo.com for our monthly ‘Healthy New York’ column, contributed by Registered Dietitian, Leslie Goldstein.