Halloween Memories: The Bad Ones.

Everything Else Random Thoughts — 28 October 2010 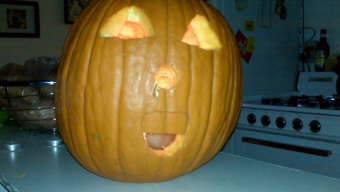 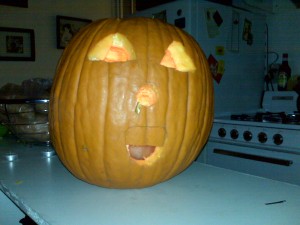 As a kid, Halloween seems to have a lot more meaning than it does as an adult.  Whenever the month of October came around, my family would be the first at the costume shop, which was a big time event to say the least.  The shelves were lined with costumes and the tops of the racks were filled with masks ranging from goofy to downright frightening.

Picking out costumes was exciting as hell and so was trick or treating. There was something magical about walking around your neighborhood, all dressed up in the brisk fall weather.  Every doorbell that you rang was a mystery. What kind of candy were they going to have?  Would they try to scare us?  Night would subsequently fall as the kids and their parents would retreat back home to explore their respective booties of treats.  Many times the candy would be duds like Smarties or some other “Old People Candy.”  But the rest would be a veritable treasure trove of chocolate, sugary goodness.

Somehow as the years pass you by, that first Halloween arrives when you no longer go trick or treating with parental supervision.  This is when for me, and my fellow dweebs that things when downhill.  No one tells you as a kid that Halloween has two faces.  You see the good side as a kid, but when you’re finally on your own, you encounter the other face, which can be quite ugly.

Let me tell you a little bit about the ugly side of Halloween, in a little tale I like to call, “Egg- plosion.”  It was the fall of 1996 and I was in eighth grade.  Halloween that year fell on a school day.  By this time I felt like I had grown out of wearing costumes, but for some reason my friends still wanted to go out trick or treating, which obviously proved to be a major mistake, in this cautionary tale.

Once we got home from school that day, I felt pressured to throw some semblance of a costume together.  During junior high school, I was a huge fan of “The Rocky Horror Picture Show.” Yes, you guessed it- I was the captain of the football team and I was crushing plenty of “Tang.”  Okay, that’s obviously a lie.  In my haste I threw together a pretty weak tribute to some of the characters in Rocky Horror and hit the streets with my friends.

As we walked from house to house we were questioned with, “how old are you?” and, “aren’t you gentleman too old to be doing this?”  After hearing this time and time again, it started to take its toll on us.  Was I really one of those losers who still trick or treats when everyone is going to parties and doing the drugs?  I believe I was.  My fear was realized as soon as night fell and began to hear stories about fellow nerds being attacked for their candy all over our housing development.

For some strange reason, we didn’t feel like any harm would come to us. We decided to hit a few more houses and then go home. And that’s when it happened.  After a few guys went home, only four of us remained.  As we walked to my street we could see a group of shadowy figures emerge behind some bushes.  They were all wearing black hoodies and half-face covered ski masks.  I don’t recall if they yelled anything out to us, but they didn’t have to.  My friends and I took one quick look at each other and started running to my house.  But sadly, we were not quick enough. The first shot, was akin to the Kennedy assassination (not really.)  It would have been good to have Abraham Zapruder on hand to film the events.  The object being hurled at us was in face raw eggs, a classic Halloween throwing tool for asshole the world round. Once my friend got hit, it wasn’t look before my Rocky Horror tribute costume was covered in runny yellow yolks.

As soon as the onslaught began, it was over.  We stood there, filthy and embarrassed.  The next day at school I passed by one of the popular guys in my grade and was greeted by a snicker, revealing that he was one of the egg assailants.  Needless to say, I felt like crap. Halloween can be a magical time of year, but on this night it was truly a night of horrors. Perhaps that is why to this day, I am deathly afraid of all egg and dairy products.  Maybe I’m just Lactose Intolerant.  We’ll just call a spade a spade on this one.  HAPPY HALLOWEEN!