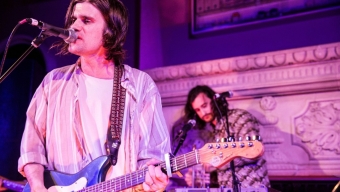 A hazy,Â wet and cold Tuesday night in Manhattan got heated up and electrified with a performance by indie rockers, Streets of Laredo inside of The Gramercy Park Hotel. Â The posh Rose Bar would play host to the sevenÂ piece band for an intimate set in front of a fireplace setting and a room full of devout fans. The unique decor and presentation of the room could not have been more appropriate and fitting for the band’s distinct sound and personality. Â Relatively new faces on the music scene, Streets of Laredo is coming off of their sophomore release “Wild,” a follow up to their debut album “Volume I & II.” Â

Casually taking the stage at 10pm, the New Zealand transplants were led by frontman Daniel Gibson followed by the rest of his sizable crew in tow. Â  On top of the array of instruments necessary at arm’s length, the seemingly insurmountable Â challenge of also fitting seven musicians in the space quickly became a moot point as each member would effortlessly move around the sparsely open area throughout the performance, creating the illusion of a far larger platform than the one that the live crowd would swarm. Â Without introduction, “Hammer & The Nail’s” powerful and beautiful vocal harmony, shared with Gibson and Sarahjane Gibson (married to drummer Dave Gibson), marked the beginning of the night and immediately infused the atmosphere with the group’s merry brand of folk rock.

Drawing largely from their latest album in the beginning of the set, the night carried on with the groovy synth drivenÂ “Remedies,” which was followed by an abrupt turn to lean more on their indie styling with “Trap For Young Players,” a fun, vintage, big band leaning track. Â Despite the limited real estate Daniel Gibson and guitarist Cameron Deyell were bouncing, dancing, and rocking around without a care in the world to the upbeat and positively infectious tune. Momentum and good vibes continued with “Caught the Fire” and the eponymous track from the latest album “Wild,” Gibson then took a short break to introduce the rest of the band which consisted of Andrew McGovern on synth, Sean MacMahon on bass, and brother Dave Gibson on the drums.

Â  Â  Â  Â  Wedged in the middle of the band’s set was a nod to their first record with the quintessentially folk feeling ”
“Hey Rose” and “Girlfriend”Â as suitable back to back cuts. After the brief visit to songs from the past, Streets of Laredo returned to playing more of the latest album in it’s entirety. Leaving absolutely no track unplayed, standouts included “Laying Low,” which put Sarahjane Gibson’s smooth and shimmery voice in the spotlight and the dance-heavy “Silly Bones” which unleashed some undeniably rhythmic hooks and upbeat melodies. The six kiwis and one Seattle native have a true gift for going back and forth between folk and indie while sometimes blending both together in a truly dazzling manor. Â The group’s 70 minute set was a perfect display of the band’s growth in a single album as well the sheer talent and musicianship not only each individual member possesses but how dynamic their chemistry is when they come together as collectively.