The Bad Plus Show Jazz is Cool at Rough Trade 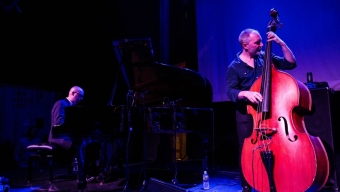 Concert Review: The Bad Plus at Rough Trade

The Monday before Thanksgiving is typically met with good vibes- even moreso when Brooklyn record shop Rough Trade welcomed in Minneapolis jazz trio The Bad Plus to Williamsburg.   Touring in support of their latest album- a compilation of fun cover songs called “It’s Hard,”  the standing room floor filled up rapidly as 9 o’ clock approached and the audience filtered through the storefront and into the main show room. As go with the flow as jazz tends to be, bassist Reid Anderson nonchalantly walked on stage followed by his band mates, pianist Ethan Iverson and drummer Dave King and without introduction they went right into their first couple of songs of the night and gave the crowd a good taste of what was to come for the remainder of the set.

After opener “Prehensile Dream,” came the evening’s first cover tune, Cyndi Lauper’s iconic “Time After Time,” a creative and innovative jazz arrangement which enamored the audience with its hook-filled chorus and sheer 80′s nostalgia. From that point on it was a groove laden journey bouncing back and forth fairly evenly between The Bad Plus original numbers and undeniably cool covers. Anderson took to the mic after the third song to introduce each member of the band and explained that if record release parties were still a thing, this is what that would be. He continued to charm the crowd throughout the night whenever he picked up the mic in between songs and engaged in witty banter with his band mates.

From time to time the overall chill vibe in the room would pick up to be a bit more feverish when King went to town on his drums. The distinctiveness of his technique was beyond awe inspiring.  Using foreign objects to alter the sound of his drum head along with a downright epic use of the tip of his drumsticks on his cymbals to create a somehow tolerable “nails on the chalkboard” sound, King was as inventive as he was talented. The intimacy and generally laid back vibe in the room created a real warm and inviting feeling inside Rough Trade, where the band would spend roughly two full hours performing divided by a brief intermission in the middle of the night. Among the uniquely awesome rebranded covers were versions of Barry Mannilow’s “Mandy,” “Maps” by the Yeah Yeah Yeahs, and” The Robots” by Kraftwerk.  Each tune familiar, catchy and brilliantly tailored for jazz.

The Bad Plus is no stranger to covers as “It’s Hard” marks the second album comprised of covers by the trio. Having spent almost the entire month on tour, November 21st at Rough Trade marked the last stop on this leg of the tour for The Bad Plus until they pick back up in mid December, undeniably wooing audiences with unparalleled stage presence and just enough charisma to show themselves off as the coolest guys in the room.