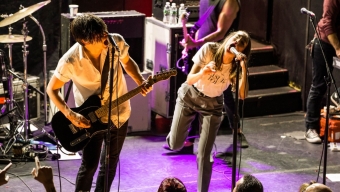 The merry band of Canadian rockers in July Talk scorched the Bowery Ballroom on one of the most frigid nights in Manhattan this year. On the heels of the release of their sophomore album “Touch,” the uncannily unique five piece band provided their fans with a night full of polarizing vocals and addictive, dance inspiring rhythms. Minutes before 11pm, the quintet made their way to stage in nonchalant and unassuming fashion, walking through dark shadows. Looming behind the band, a banner hung adorned with hands, the cover art from their latest record release.

The band juxtaposed their low key stage entrance with an outright electric opening with “Touch” intro track, “Picturing Love.”  The new and undeniably catchy keyboard driven tune is a great snapshot of July Talk’s past, present, and penchant for seamlessly blending extremely different genres and and vocal stylings in a tasteful and disciplined style to create a truly distinct and dynamic sound. In what felt like an aural one-two punch, the band went right into the guttural blues rock laden “Summer Dress” from their self-titled debut album. The hard hitting groove paced by drummer Danny Miles physically moved concert goers from whimsical swaying into synchronized body rocking. Although they couldn’t be further from each other on the vocal spectrum, co-singers Leah Fay and Peter Dreimanis share an obvious musical and emotional chemistry which exhibited itself in many facets from the duo’s beautifully haunting harmonies to their almost marionette-like dance interactions with each other.

The pair not only shone in interaction together though- Fay and Dreimanis also dominated the room with their individualistic charisma. She moved about stage, in between shining on the microphone, with equal parts elegance, grace, and quirkiness. Dreimanis meanwhile exuded emotion through animated facial expressions and gestures ranging from intense guitar strums to this distraught and menacing outreach toward his singing partner, which persisted throughout the night. The set continued on with the garage rock, lo-fi feel “Headsick” and rhythmic right turn with the heavier, lurching strums and melodies of “Gentleman.” New tracks like “Johnny + Mary” and “Now I Know” would then bring the tempo back up, reviving the dancing on stage and in the live crowd.

The band alternated between albums- more vintage and uptempo new cuts like “Beck + Call” and “Push + Pull” were nice changes of pace to the grunge and punk vibe of “Uninvited” and the Johnny Cash cadenced “I’ve Rationed Well.”  For over ninety minutes, the set was an absolute gift from July Talk, with 18 songs that nearly covered their entire catalog- an energetic and powerful ride that showcased the band’s musical growth in the short time they’ve been collaborating. Aside from their inarguable musicianship, July Talk is irrefutably authentic and organic. Not the type of chemistry and output that can be mimicked or manufactured.