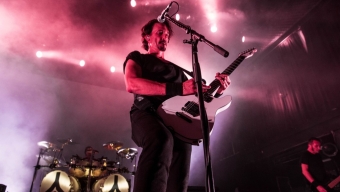 The prospects of a school night did little to detract a crowd of New York City headbangers from gathering in the appropriately titled Hell’s Kitchen on Sunday evening. A particularly rowdy bunch welcomed the headliners in Gojira and support act TessaracT to the famed Terminal 5 stage during the latest stop along the 2016 ‘Magma Tour.’  Though this specific show would be the 25th and final one on the US leg, the two bands would subsequently return to Europe for a homecoming of sorts. Between both bands, the City faithful embraced and endured an onslaught of relentless riffs, unwieldy solos and thunderous double bass for nearly three action packed hours of rock.

The night went from zero to heavy at seemingly the very moment that TesseracT hit center stage. The English prog-rockers wasted no time in getting the room riled up and setting an example for how the night was to play out. Lead vocalist Daniel Thompkins bolted onto the stage with enough energy to ignite the air in the room as his bandmates each boasted some distinctive stage presence all while staying incomprehensibly tight as they weaved through each of their eight intricate and entrancing compositions. Dishing out a healthy and diverse selection from across their three albums, TesseracT opened with the aurally audacious “Phoenix” before ripping through tracks like “Concealing Fate,” “Part 3: The Impossible,” “Of Matter-Retrospect,” “Dystopia” and closing their power packed set with “Of Mind – Nocturne.”  Original to the core, TesseracT rocked the jam-packed venue in an opening set that left the crowd eager to be taken to the next level.

Deafening chants of “Go-jir-a” quickly surrounded the standing room only space, rendering the house music from the PA as simple background music. Just minutes after 10 o’ clock, video of a volcanic eruption began playing on the screen suspended behind center stage. Amid the cascading lava, Mario Duplantier appeared in front the screen, emerging from the fiery stream to make his way to his perfectly positioned drum kit. Duplantier got to work right away and started pounding out the intro to “Only Pain” before summoning the rest of the band- guitarist Christian Andreu took his position on stage right, bassist Jean-Michael Labadie stage left, and singer Joe Duplantier right in the center, with his brother’s drumkit hovering just behind him. Intensity was dominant from the get go with the set opener from their latest album but things really kicked into overdrive with the arrival of classic thrash track “The Heaviest Matter in the Universe.”

Under the disguise of the cool blue strobe lights, a heavy metal inferno was brewing at Gojira’s behest. Before getting into “Silvera,” another track from ‘Magma,’ Joe Duplantier took a few moments to express his gratitude to the fans, how much a of a crazy ride the US portion of their tour was, and how there was no better place to end it than New York City. Metal mayhem resumed as they got right back to the grueling grooves with “Stranded” and “Flying Whales” back to back. Every inch of the venue saw some foot stomping, head banging, or horns thrusting for the entirety of the band’s energy-laden set. A hypnotic, drum crescendo would give way to “Pray,” a more droning tune that bounces back and forth from slow and grungy to a literal frenzy of metal. Following a short reprieve from the stage, the band returned for a double encore which began with “Clone” from their first album ‘Terra Incognita’ and concluded with fierce melody driven “Oroborus” and incomparably groovy “Vacuity.” In all, the 17 song set was chock full of new ‘Magma’ material, covering six out of the ten songs on the record, on top of an array of cuts comprised each of the bands albums.

TesseracT did an outstanding job of laying the ground work for the night with Gojira picking up and hurling the crowd the rest of the way up to the metal mountain peak. The auditory output from the tag team of bands could’ve satiated the hungriest of metal fiends. The ‘Magma Tour’ brought all the energy synonymous with its name and then some and will surely continue to do so as it makes its way overseas.