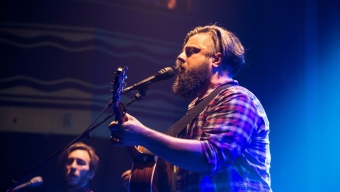 A dreary and overcast autumn night was no match for the storm The Dear Hunter generated inside Webster Hall‘s iconic walls on Saturday evening. The band’s ‘Final Act Tour’ rolled through New York City on October 1st in support of their latest record, “Act V: Hymns with the Devil in Confessional.” The venue’s floor was tightly packed with eager fans and its atmosphere was filled with their mounting excitement. The house lights cut out a few minutes after 9pm and created a moment that spiked the energy to a deafening roar in anticipation of the band’s arrival to center stage. Absence of light brought the presence of sound from the musicians as the keyboard and drum intro leading into “The March” permeated the building’s airwaves. The droning, commanding cadence of the cut from the new album was met with thunderous foot stomping action from the crowd that could have easily registered on the Richter scale.

The energy output never wavered from the audience, especially once the stage lights illuminated the full six piece band. Stage right was home for guitaristsÂ Rob Parr and Max Tousseau, Nick Sollecito with his keyboard and bass were set up on stage left, and just slightly behind the frontline, was Nick Crescenzo on drums. Though the pieces would remain in place around him, the impressive and dynamic vocal presence possessed by singer and band founder, Casey Crescenzo, would be the evening’s true focal point.

The Dear Hunter set the bar high for themselves early in the night with their explosive introduction and did not fail to build on that momentum at any point through the entirety of their set. “The Most Cursed of Hands/Who Am I,” another track from the group’s dynamic latest album seamlessly and masterfully blended country, lounge and rock vibes together, beginning just a bit slow before hitting a signature anthemic stride. The charismatic chemistry and remarkable tightness of the collective group continued to be on display as the vibe slowed down a bit and the crowd’s stomping turned to swaying amid the opening strums of “Waves.” Despite Crescenzo’s powerful vocals, he was drowned out by the audience’s roaring “oh-oh-ohh’s” that popped up throughout the song’s progression.

Just as quickly as the vibe the slowed down, it picked back up with the uniquely old-time rock infused “The Bitter Suite IV and V: The Congregation and the Sermon in the Silt,” catchy track names certainly, but far better in a live setting than their otherwise wordy titles might imply. The set then began to transition a bit further back into the band’s history with the emergence of songs from “Act II” and “Act III.” “He Said He Had a Story” and “Saved” gave way to crowd favorite and keyboard rhythm driven, “Smiling Swine.” Undeniably catchy, it had everyone in sight clapping, bouncing and singing along and brought the room’s atmosphere to peak levels. The Dear Hunter then brought the focus back around on Act V with the trifecta of “Gloria’s” flawless vocal harmonies, “The Revival’s” composition of Spanish rock blended with just a bit of Go-Go, and the emotion that “The Flame (Is Gone)’s” lyrics evoked from concertgoers rounded out the set.

After a quick bow, and a few minute break, The Dear Hunter returned for a two song encore that began with the epic rock journey from Act III, “Mustard Gas.” Refueled and ready for one more, the band wrapped up with the beautiful and powerful ballad “Life and Death.” The near ninety minute set was an exciting, incomparably fun and physically demanding experience for the band and equally as much for the fans on hand. With “Act VI” known to be on the horizon, we are all impatiently waiting for The Dear Hunter’s return to New York City, a wait that began the moment that the show let out on Saturday night.