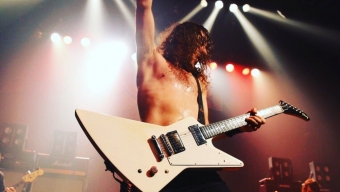 Airbourne with The Wild

The Australian rock band Airbourne infected New York City on Wednesday night with the dose of metal it so sorely needed.  Touring in support of their September release “Breakin’ Outta Hell,” the band dropped into 23rd Street’s Gramercy Theatre with help from The Wild! as their support act. The venue’s show room floor went from tight to tighter as showtime drew near, leaving barely enough space to navigate though the sea of leather jackets, long hair and the assortment of spiked accessories.

Old western music blared from the PA system, filling the room with some festive noise as the house lights drew dim before The Wild! made their predictable explosion in front of the live crowd.  Launching onto the stage as if they were shot out of a cannon, the group’s unique blend of rockabilly, metal and blues was imprinted on the audience mere seconds after their intro as opener “Roadhouse” ignited into its scorching main riff.  Singer and lead guitarist Dylan Villain (great name!) then took his position at center stage  while being flanked by rhythm guitarist The Kid, bass player Boozus and drummer Reese Lightning who dutifully kept each song’s tempo firmly in sync.  Momentum continued to mount with the slightly groovier and bluesier new single “Ready to Roll,” followed by some thunderous tracks like “GxDxWxB,” “Banger,” “Deuces” and crowd favorite “Slow Burn.” The feverish combination of hard hitting riffs and solos from each of the songs led up to a really well placed dynamic change with the slower and more personal blues cut “What About You.”

What better way to bring it back to an unadulterated rock show than with a beer funnel race? The short interlude saw a square-off between bass and rhythm guitar with the frontman Villain making it clear that Boozus was the defending champion- and in the blink of an eye, he retained his title as The Kid was left chugging in the dust. The Wild! closed out their 45 minute rocket fueled set with “Party Til You’re Dead,” an apt description of the band’s vibe. The Wild! aren’t just musicians, they are all encompassing performers.

After a very brief break, the room grew rife with excitement and anticipation knowing Airbourne was about to take the stage. The raising of horns and merciless screaming ensued as the Terminator theme song played overhead and frontman Joel O’Keeffe ran onto stage literally kicking and screaming his way into “Ready to Rock.”  Aibourne’s blend of classic rock and hair metal amplified an excitable Gramercy audience quickly and was welcomed by the roomful of adoring fans.  With their frenzied screaming and vigorous headbanging, the audience somehow managed to top the band’s own energy peak as tracks like ” Too Much, Too Young, Too Fast” allowed the fans’ voices to override the group’s instruments, especially on the song’s catchy chorus.  Rhythm guitarist David Roads and bass player Justin Street were a constant blur most of the night- not only were their hands lighting fast, but the perpetual movement of both musicians bouncing and frenetically racing across the stage ensured that they were having just as much fun as the crowd. “Chewin’ the Fat” from 2010′s “No Guts. No Glory.” followed and saw another massive bout of crowd participation on vocals.  The fourth song of the night marked the first appearance of a track from the new album and “Rivalry’s” heavy, churning, drudging drum intro kept feet stomping and heads banging collectively.

With a short reprieve from the microphone, O’ Keeffe was given a few moments to enjoy a cold one in true rock star fashion, by taking a few sips and then repeatedly smashing the can against his head which created a SeaWorld type splash zone for concertgoers in the first couple of rows. After the short hydration break, another taste of the new album was showcased with the title track “Breakin’ Outta Hell.” Comprised of a ripping solo, Judas Priest-like riffs, and those distinct vocals, the new material felt familiar and fresh at the same time. The night wound down with fan favorites “No Way But The Hard Way” and “Stand Up for Rock N’ Roll” but the bandmates and their fans weren’t ready to part ways just yet. A few minutes away from the stage seemed unbearable for everyone there and before long Airbourne returned to the stage for an eagerly anticipated encore. An impressive hour long set was capped off with two of the band’s biggest songs “Live It Up” and “Running Wild.”  Between the crowd knowing the show was coming to an end and the band gearing up for a proper send off, those last ten minutes were packed full of more energy than the entirety of the rest of the night combined.