Terminal 5 No Match for The Kills’ Brand of Cool 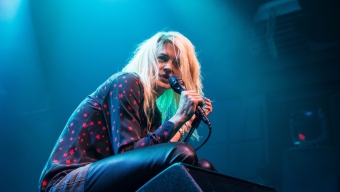 Concert Review: The Kills at Terminal 5

Touring in support of the release of June’s “Ash & Ice,” indie rock band The Kills made a triumphant headlining appearance at New York City’s Terminal 5 on Friday night. The jam-packed standing room floor left just enough space between bodies for the seemingly uncontrollable dancing and swaying that the eclectic music inspired. Shortly after 9pm, a rich blue light filled the room illuminating the stage backdrop- a massive volcano lined with palm trees- an aesthetic similar to the album cover from their aforementioned fifth studio release. Standing atop a shadow-filled stage Alison Mosshart and Jamie Hince stood front and center, ripping through opening track “Heart of a Dog,” a rhythmic and entrancing single that would pace the remainder of the show.

As the bright lights then shone, the crowd erupted at the very moment the duo became visible on stage, quickly beginning the energy transfer between band and fans. Hince’s simplistic vintage-style rock n’roll tone paired with his creative fretboard work was utterly dominant while Mosshart’s movements on stage were just as expressive, genuine, and unique as her voice. Despite the fact that Terminal 5 boasts a large stage, she managed to make it feel twice its size. On top of it being a reflexive reaction to her own music, her dancing was also witnessed to be deeply infectious as there wasn’t a still body in sight. Momentum continued to mount as the band dipped into “U.R.A Fever,” a catchy, electronic song that allowed Hince and Mosshart to collaborate on vocals. The set continued to travel across albums with “Kissy Kissy” (from 2003 debut “Keep on Your Mean Side”) and circled back around to newer cuts like “Hard Habit to Break” and “Impossible Tracks” back to back. On top the immeasurable electricity the duo created organically, the visuals from the hypnotic strobes helped turn a rocking concert into a killer dance party, as the style of music deftly moved between blues, punk and garage rock seamlessly.

By mid-set The Kills unleashed crowd favorite “Doing it to Death” which generated a deafening audience response from the opening thumps of the song’s bassline. Other cuts like “Baby Says” and “Dead Road 7″ had a bit of a retro feel while the gentle, washy guitar strums of “Echo Home” induced a state of swaying around the spacious three level space. Almost as quickly, the sways turned back over to dancing as the tempo picked up with the hook driven “Whirling Eye.” As an added highlight, Mosshart then took hold of two large drums during the prelude to “Pots and Pans” before jumping back on the mic to take over on the song’s intense vocals.

While the show closer for the main set was the slower “Monkey 23,” it was clear that the crowd wasn’t ready to go just yet. A hauntingly beautiful solo acoustic performance of “That Love” allowed Mosshart’s star to shine before giving way to the reappearance of Hince for another undeniably dance provoking tune- “Siberian Nights.” The encore was capped off with an incomparably funky rendition of “Fried My Little Brains” taking the crowd right near the ninety minute mark. The undeniably charismatic pair coupled some impressive musicianship with a stage presents that other acts would ‘kill’ for. And although the set leaned heavily on the new album, enough of the band’s catalog was certainly thrown into the mix to appease even some of The Kills’ most dedicated long time fans.