Metallica Tune Up With Sold Out Webster Hall Performance 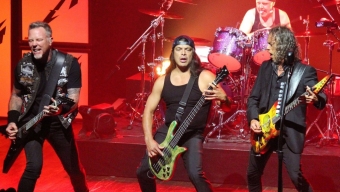 In the midst of a full on media blitz in New York City to support the release of their tenth studio effort- “Hardwired…To Self-Destruct,” due November 18th- Metallica sold out the 1,500 standing room only capacity at Webster Hall on Tuesday night in roughly the time it takes for drummer Lars Ulrich to tap his hi-hat. At Saturday’s performance on the Great Lawn at Central Park’s “Global Citizen Festival” fans were alerted to the secret show and thousands would subsequently enter a lottery to purchase tickets for just $25, the proceeds of which would be donated to local nonprofit organization City Harvest. With a street filled with revelers hoping for a glimpse of the stage standing outside, the standing room only space inside was packed with bodies on top of bodies, hoping to get as close as possible to the legendary masters of thrash metal.

Predictably, the show was sensational as the band dipped into the depths of their catalog while also showcasing some new music for the fiercely loyal crowd who did their part by forming racuous mosh pits all evening long. With nary an announcement, the four members strode out to center stage led by frontman James Hetfield, flanked by bass player Robert Trujillo, guitarist Kirk Hammett and fashionably last, drummer Lars Ulrich who, in typical fashion, hammed it up with a drink in hand to amplify the already excitable crowd. Though more casual Metallica fans- none in the house on this night- may scoff at the band opening with a cover song, longtime listeners will attest that the group’s version of Budgie’s “Breadfan” is perhaps the most appropriate way to kick off a show. The familiar riff which the band debuted on as a B-side to 1988 single “Harvester of Sorrow” coupled with Hetfield’s vocals, which sound as polished as they ever have, immediately ignited the audience, anxiously anticipating the unfolding of the surprise setlist.

Electrifying set-staples like the stirring “Fade to Black,” the heavy and plodding “Sad But True,” and of course the war epic “One” were included as always. But it was also a nice change of pace for the band to bang heads with lesser known tracks like “Holier Than Thou,” the instrumental “Orion,” (a tribute to original bassist Cliff Burton) and in their encore, the infectious “Whiskey in the Jar,” another cover tune, this time courtesy of Thin Lizzy. For all the knocks that Ulrich takes as a spokesperson, his drumming was on point throughout the evening, pacing the entire band through a slew of lightning fast thrash tracks. The insanely skilled Hammett and the serpentine-like Trujillo also had no trouble keeping pace, especially on the memorable debut of “Moth Into Flame,” a seamless fit alongside any Metallica track from the band’s nearly four decades together.

No Metallica show is complete however without a nod to legendary hits like the pulverizing “Master of Puppets,” the anthemic “For Whom the Bell Tolls” and the iconic “Enter Sandman,’ cuts which the bandmates have without question, performed more than 3,421,429 times together. That said, there’s no phoning it in from Metallica and somehow, the Rock and Roll Hall of Famers manage to make each performance a special one regardless of the venue. The small ballroom space on East 11th Street may as well have been Madison Square Garden, without much of the pyrotechnic pomp and circumstance mind you. When the somewhat abbreviated hour and forty-five minutes ended in typical Metallica fashion with the defiant “Seek and Destroy” from 1983′s “Kill ‘Em All” closing the show, the full house of concertgoers audibly begged for more music. But the disappointment of the moment was was clearly fleeting as the capacity crowd in attendance collectively appreciated the special nature of the performance they had all witnessed together, in the intimacy of a New York City club.