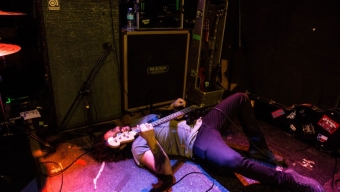 Pennsylvania groove metal band, Crobot, cranked out equal parts fat riffs, funky bass and commanding vocals on Monday night at Brooklyn’s beloved metal lair, St. Vitus. The relatively new band is in the midst of a fairly extensive international tour in support of their upcoming album, “Welcome to Fat City” (available now), the band’s much anticipated sophomore entry and follow up to the critically acclaimed “Something Supernatural” (2014). But those who have been in attendance for the band’s shows thus far have been treated to a good portion of the new material and as a result, have been given the opportunity to sample much of the new album before its release.

As 10 o’clock drew near, St. Vitus’s showroom floor began to fill in while the band tuned up. Just before the hour hit, Crobot frontman Brandon Yeagley approached the stage wearing an outfit that can only be described as a fashionable representation of the band’s stylistic influences- from his Black Sabbath Converse sneakers to his hippie-esque button down shirt underneath a southern-style leather vest with tassels along the waist. In fact, the singer’s ensemble is best described as “what you see is what you get” and what you get is nothing short of authentic rock n’ roll. The show started after Yeagley asked the audience “Would you mind if we started a bit early?” Without delay the crowd cheered agreeably and the band responded with “Welcome to Fat City,” the self titled track from their latest release. It took no longer than a minute for bassist Jake Figueroa‘s distinct energy to emerge. His constant and unique movement wasn’t the only contributing factor that made the relatively small stage feel immense. Guitarist Chris Bishop danced around the stage in between bouts of jumping on and off amplifiers as if he was fueled by his own riffs. At one point there was even an unsuccessful leap frog attempt where Bishop couldn’t get enough air to clear Yeagley and in true rockstar fashion he finished the song from the floor on his back. This lighthearted, loose behavior really demonstrated how much the band enjoys playing together- their chemistry was contagious with the crowd.

Three more tracks from the second album followed the set opener- “Plague of the Mammoth,” “Easy Money” and “Hold on for Dear Life.” Despite being previously unheard, there was still a crunchy, psychedelic familiarity in each of the songs. The new jams fired up concert goers as the band went into their first crowd backed vocal track, “The Skull of Geronimo.” The transition from new material to old was seamless because the band has done an amazing job creating a signature sound which they continue to explore and grow with. Following “The Skull of Geronimo,” bassist James Lascu (from support act Wilson) tagged in and took over for Figueroa on four songs. Lascu got to jam on the new single “Not for Sale” as well as monster tracks from the first album, “The Necromancer” and “Legend of the Spaceborn Killer.” Figueroa would return for the last four songs of the night, resuming with new tracks “Play it Cool,” “Blood on the Snow” and “Moment of Truth.” The band is clearly confident and proud of their new material as eight tracks in the twelve song set came from their latest release. Rightfully so, as-the audience was as electric as the band themselves for the entire hour. Though a majority of the night was full of the unknown, Crobot closed the set with some of their fattest riffs from the more familiar track “Fly on the Wall.”

From start to end, there were no slow downs on energy from the band or their fans. As Crobot continues to trail across the globe, leaving melted faces and sore necks in their paths, prepare yourselves to watch these guys grow exponentially in the rock scene. Their performance alone demands your attention.